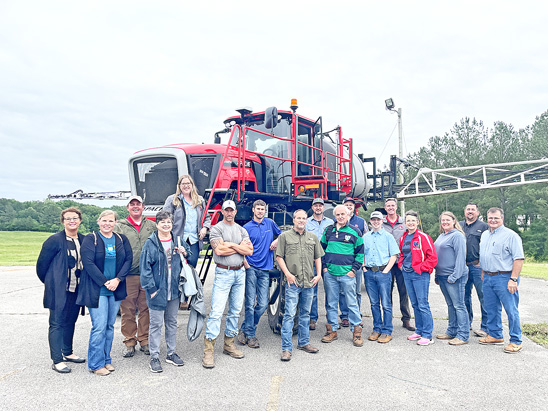 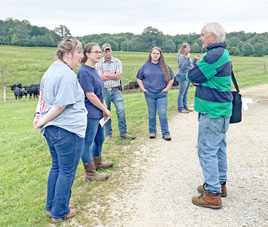 Dresden FFA members voluntarily came to the Weakley County Schools Livestock Production Farm on what would have been the start of their summer vacation to serve as guides for an Ag in the Classroom experience for middle and high school teachers. Seen here are (L to R) Amanda Perry, Merissa Harrison, Farm Assistant Jonathan Smartt, and Mavree Craig responding to questions from Dr. Craig Wilson, Director of USDA Future Scientists Program, from Texas A&M University.

DRESDEN (May 26) – To increase the number of teachers incorporating Ag IN the Classroom, the Tennessee Farm Bureau has launched a project to take teachers OUT of the classroom. And the Weakley County Schools Livestock Production Farm was one of the first stops.

On Monday, as Weakley County Schools were concluding the school year, 12 middle school science and high school ag teachers and Farm Bureau representatives began their day with biscuits and sausage from the Livestock Production Farm and heard from local leaders and Dresden High students. Other stops in the day included a visit to Tosh Farm and to Buckaroo Meats in Camden.

“The idea is to see the complete cycle from feed, to raising hogs, to processing,” said Chris Fleming, Ag in the Classroom Coordinator and organizer of day’s agenda.

In an interview prior to the presentations, Fleming commended the Weakley County Schools operation and noted that while the number of school farms was increasing there was “nothing as full blown as this.”

He also praised local Farm Bureau Women leadership Linda Fowler and Terri Brundige for their efforts to integrate agriculture into preschools and elementary school classrooms with projects such as the hanging gardens and the incubators, funded by Ag in the Classroom, that enable the chick hatching projects for second graders.

He explained the tours of farm facilities and interactions with farmers such as Ben Moore who invited the educators to climb aboard the sprayer he had driven from his nearby farm were brought about after former TN Farm Bureau Association President Jeff Akin suggested extending awareness beyond Ag in the Classroom workshops and sponsored farm days each year.

Quoting Akins, Fleming said, “The best way to get teachers excited about agriculture is to get them on a farm and let them see what’s going on.”

He also stressed that with agriculture providing at least 18% of employment in the state, career ag awareness such as that provided by farm manager and Dresden High School ag teacher Jason Kemp was critical.

Weakley Farmers Co-Op’s Agronomy Products Manager Jason Brigance addressed the group and said the partnership with the farm and the newly planted test plots was a “win/win” as the CoOp fulfilled its mission to test products, look for trends, and monitor disease characteristics and students received an up-close look at the process of improving crop yields.

Moore helped put some of the challenges of modern farming into perspective as he explained about the rising cost and importance of technology in trying to respond to factors like the shortened seasons due to factors like this year’s overabundance of rainfall.

“If you bought all new equipment and tried to start a farm, you couldn’t do it with a million dollars,” he underscored, adding, “Your grandfathers may have had a tractor they kept forever. You won’t say that about this sprayer, ‘I’ve had that sprayer for 40 years.’ It’s not going to work like that. They update the technology so fast they are not going to be relics. I don’t want one that’s over 3-4 years old. There’s so much that could go wrong.”

He also compared his experience with that of his father’s in the 70s, noting that his recent planting of 1,400 acres would have taken the elder Moore a month to six weeks with the equipment of his day.

Kemp commended the students who next took on presenter roles as the group toured the refrigeration space for the Farm’s pork and beef products, sows farrowing house, nursery, gestation floor, and finishing floor as well as shared about the cow/calf operation and acreage used for demonstration and test plots. He explained that the tours fell on a day that the students were exempt from attending but “they came in on their own time because they appreciate the farm and what we are doing.”

The students who provided the explanations of each of the farm’s areas were Kaci Finney, Hannah White, Mavree Craig, Merissa Harrison, Amanda Perry, Kaylie Graves, Wylie Ogg, and Braydon Hodges. Perry, the newly elected Dresden FFA Chapter vice president, said the opportunity to interact with educators was both fun and meaningful, “I felt that it was important for us to share what we know with others. It was a very cool experience since we got to speak with other agriculture teachers and inspire them to use more agriculture in the classroom.”