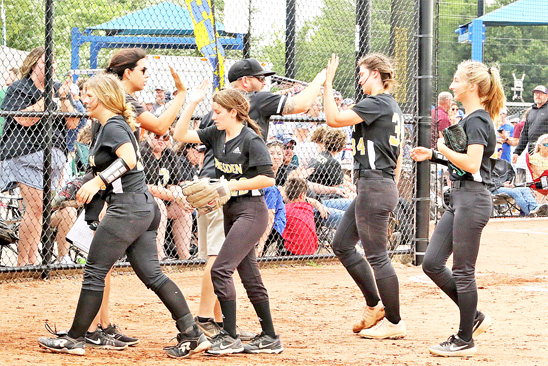 Special to the Enterprise

Dresden took advantage of six Harriman errors to win its state softball opener last Tuesday in Murfreesboro, 5-3. Dresden only managed three hits, but made good use of their economy. Eva Stafford was impressive in the circle as well. She struck out 11 Harriman hitters to get the victory.

The Lady Lions got on the board quickly when Paisley Pittman reached and later scored on a wild pitch. In the second inning, Mollie Oliver reached on a two-base error and later scored to boost Dresden to a 2-0 lead. Harriman took advantage of some Dresden largesse in the third and tied the game. Anna Garland reached on a hit. Kendal Mason got aboard with an error. Garland scored when Lily Taylor singled and later scored following Addison Oliver’s base hit. Mason scored to tie the game at 2.
In the top of the fifth, Pittman scored on a fielder’s choice,to edge Dresden in front 3-2, but Harriman knotted the score in the bottom half, when Taylor’s base hit crossed Garland. Dresden iced it in the seventh. Mollie Oliver led the seventh with a double and scored on an error. Pittman singled and later scored on a passed ball for a 5-3 lead. In the bottom of the seventh, Stafford forced a line out, pop out, then collected a strike out to win the game. Mollie Oliver, Stafford and Pittman each jad hits for Dresden. Pittman scored three runs. Garland, Taylor and Williams had two hits each for Harriman.
Wednesday morning, Dresden faced vaunted Eagleville in winners-bracket play and had to contend with the one of the top pitchers in Class A, Addisyn Litton. Litton threw a no hitter, struck out 15 and walked six as her team eaked out a 1-0 victory.
Dresden’s Stafford was no slouch herself as she struck out eight and allowed just two hits.
Eagleville produced a run on a hit and an error. Mason singled, stole second and came home on an error. Eagleville made the run stand up as the Lady Lions were consigned to the losers bracket.
Wednesday afternoon, Dresden suffered a 7-0 setback to Gordonsville. The Lady Lions’ bats went dormant for the second straight game. Dresden managed just one hit off the Lady Tigers’ Kailey Plumlee, who struck out 20 Dresden batters. Stafford, who worked six innings and struck out 14 herself, had the lone Dresden hit. Gordonsville put up a five spot in the third, then two more in the fifth to advance in the playoffs.
The Lady Lions, who bid farewell to just two seniors, finish the season with a 16-8 mark and their first state tournament victory in school history.