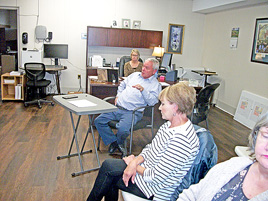 DRESDEN (May 23) — Members of the Dresden Budget Committee considered capital expenditures for FY 2022-2023, during a meeting at Dresden City Hall on Monday, May 23.

Mayor Jeff Washburn stated the FY2022-2023 budget is balanced and is very conservative, with few capital expenditures for new equipment, due to a potential loss of property and sales tax revenue. He said the monetary outlook may very well improve, as former businesses rebuild and new businesses come to Dresden in the coming months; however, the mayor noted it’s better to plan for a lean year in order not to risk going over budget, and if tax revenues increase, all the better.

The only major capital expenditure for the purchase new equipment planned for the FY 2022-2023 budget was a new brush truck to extinguish grass fires. Mayor Washburn stated the fire department’s current brush truck was damaged in the December 10, 2021 tornado and needs to be replaced. He explained the S-10 pickup was donated to the City of Dresden over 10 years ago, and has inadequate pumping capacity to do a very good job. The mayor informed the board a new, fully equipped, brush truck would cost approximately $52,000, but the cost could be financed through a loan spread out over a three-year period.

Other expenditures for proposed capital projects, which will be financed by appropriations, as follows: street paving = $278,525; sidewalk repair = $15,000; and Christmas decorations = $10,000.

According to Mayor Washburn, other departments received new equipment during FY 2021-2022 and are in pretty good shape. The police department purchased three new police vehicles, after receiving insurance money and transferring $4,000 out of the fire department. Additionally, the highway and street fund received a new grapple truck.

The purchase of a new leaf blower machine, which vacuums up leaves, was discussed, because the 10-year-old machine has constant break-downs, due to component failure. It was noted the bearings had to be replaced twice during the past leaf pickup season. Alderman Lyndal Dilday stated the excessive vibration might be attributed to a bent drive shaft or other damage, after the blades struck sticks and metal objects while vacuuming leaves. However it was decided to postpose purchasing a new machine for now and install new, top-of-the line bearings in the old one, which cost $800 to $1,000, instead of the cheaper, lower quality bearings costing $400 to $500. Because of long delays for parts and equipment, Dilday suggested ordering the bearings now, so they will arrive in time for this coming fall. It was decided a new leaf machine, which would cost approximately $80,000, could wait until FY 2023-2024.

Although the parks and recreation department needs a spray fertilizer machine, the mayor stated this is also left out of the budget until FY 2023-2024, because of it being a tight budget year.

Mayor Washburn noted Dresden will apply for American Rescue Plan grant funding to help cover the cost of a safe room planned for the city’s new municipal complex, and the purchase of a tornado warning siren. However, City Recorder Jennifer Branscum explained the grant for the safe room can’t be applied for until the plans for the municipal complex are finalized.

Alderman Kenneth Moore said donated funds should be spent to benefit all of the citizens of Dresden.

Alderwoman Sandra Klutts agreed saying, money provided to help the citizens of Dresden would be well-spent on constructing a safe room and installing tornado sirens.

The mayor noted he hopes to get a grant to purchase a portable three-phase diesel generator, in order to provide electrical power for the city’s sewer lift station during a blackout. He recalled a previous loss of electricity left the sewer lift station inoperable, causing sewage backups in certain homes.

The budget calls for a 30-cent, across-the-board, pay increase for all city employees. However the mayor stated if a department head gives an employee a poor evaluation, the worker might only receive a 10-cent pay hike.

The city’s budget for FY 2022-2023, which lists total anticipated revenues and expenditures, includes no tax increase; however there is an increase in the water and sewer rates.

The city’s proposed budget for FY 2022-2023 retains the same property tax rate of $1.4837 per $100 of assessed value. However, due to a decrease in revenue in the water and sewer fund, rates are increasing to cover expenses, as required by law.

Mayor Washburn also reported the budget for fiscal year 2022-2023 is a balanced budget.

A breakdown of the City of Dresden’s revenues and expenditures in the FY 2022-2023 budget by departments is as follows:

The city’s indebtedness to West Kentucky & West Tennessee Telecommunications Cooperative for installing high speed internet, which amounts to $146,795 per year, is paid out of water department funds.

Inside the city limits of Dresden, the monthly base water rate for residential, churches and commercial structures will increase from $12.50 to $14, which amounts to a $1.50 price hike. Additionally, the rate for water usage over 2,000 gallons is climbing from $2.10 to $2.35 per 1,000 gallons of water usage.

Customers outside the city limits will also experience an increase in the cost for water and sewer service.  The non-resident base water rates are climbing from $28.45 to $29.45, and rural customers will be charged $3.82 per 1,000 gallon consumption over 2,000 gallons. The base sewer rate amounts to 150 percent of the non-residential water rate.

Mayor Washburn explained, due to the destruction of homes and businesses in the December 10, 2021 tornado, there has been a decrease in water usage. This has resulted in loss of revenue, which necessitates an increase in the water and sewer rate to cover operating expenses and upkeep. However, the mayor noted, with the rebuilding of homes and businesses now underway, the city may be able to reduce the water and sewer rates as more customers resume services.

A budget ordinance for FY 2022-2023 was approved on first reading, during the board’s regular monthly meeting on May 2, 2022. It must be presented to local citizens during a public hearing and second reading on June 6, before going into effect.

During the December 6, 2021 meeting, Mayor Washburn pointed out the interest drawn on the money the city is holding in reserve for employee’s retirement payments under the city’s current plan was less than 1.0 percent at that time, while the state plan was earning 15.62 percent.

Additionally, the city’s plan is estimated to cost $85,956 during the current fiscal year, which amounts to roughly 20 cents on the city’s current property tax rate.

The city’s plan does not have a cost of living provision, but the state plan does.

Under the state’s retirement system, all employees of the City of Dresden could be transferred over to TCRS without any loss of vesting of years of service credit.

Details of the state plan will be discussed once the actuarial study is completed.

The next regularly scheduled board meeting is scheduled for Monday, June 6, beginning at 6 p.m.

With no further business to discuss, the meeting adjourned.