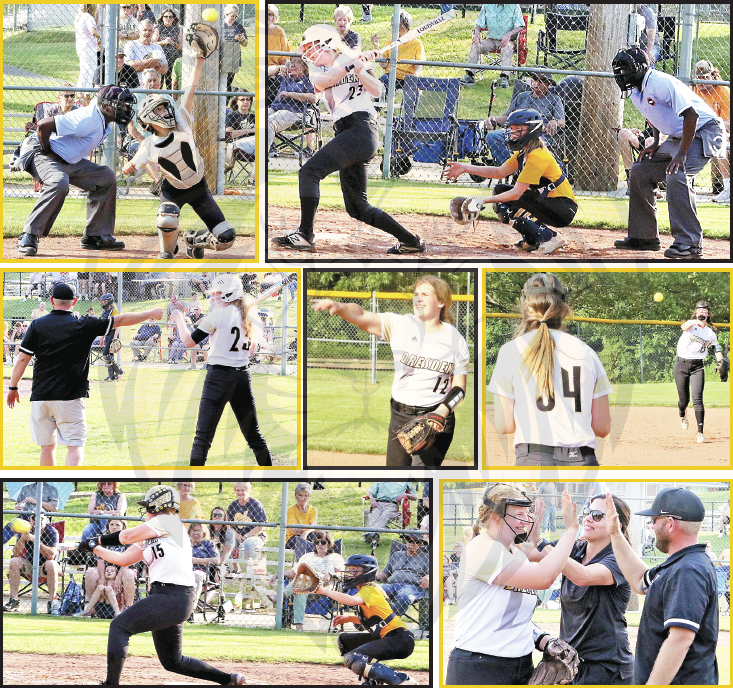 The Dresden Lady Lions softball team has a slate of underclassmen, with only two seniors this year. The young team, along with Coach Jennifer Brooks with Jerry Gallimore and Luke Downard helping, is bound for Murfreesboro this week after claiming the title of Region 7A champion. Team members pictured above include (In No Order) #15 Mollie Oliver, #34 Paisley Pittman, #12 Kaci Finney and #23 Annika Jolley. Other players are Kaylee Jarred, Kailee Graves, Eva Stafford, Maggie Oliver, Keely Swatzell, Parker Ferrell, Ashlee Mallon, Emma Breaux, Allie Spaulding, Summer DiPietro, Haylee Jarred, Shelby Sumner, Emma Waycaster, and Tilley Hopper. Photos are highlights of the Lady Lions’ game against Trenton Peabody on Wednesday, May 18, when the team won 10-0 to claim the Region title. Photos courtesy of Melissa Oliver Overton

DRESDEN (May 20) – There is some disagreement whether or not Dresden’s Lady Lions have ever been to the softball state tournament before.

It depends on how you look at it.

In 2022, this would have been considered a sectional game, but not back in 1990. Either way. It’s been a long time since Dresden experienced this kind of success in softball.

This year, Dresden is 15-6 and Region 7A champion. The Lady Lions topped Peabody and perennial DHS nemesis Halls to reach substate. Then Dresden’s substate opponent forfeited, giving the Lady Lions a walkover to Murfreesboro.

It may not be the way head coach Jennifer Brooks wanted it, but she feels good about her team’s attitude heading to state.

“We have a solid team,” she said., “We have consistency, and the girls know I’m going to be here. They give me 100 percent.”

Dresden had a bit of turnover in its softball program, but Brooks said she’d be a mainstay there and that’s paid dividends.

Sophomore pitcher Eva Stafford has produced for Dresden this year. She has 214 strikeouts this year. Seven of her starters are hitting at least .429.

“I work with the defense and our assistant coach Jerry Gallimore works with the hitters,” Brooks said. “It seems like it’s someone different for us every game stepping up.”

“Paisley Pittman was injured, but has come back strong, ” Brooks said. “She plays first for us. She’s tall, has good hands and can stretch.”

The seeds for this year’s success were planted a year ago. They took part in a camp that simulated a college workout at UT Martin.

“We were exposed to what it would be like at a college practice,” Brooks said.

In preparation for the tournament, the Lady Lions worked on fielding, and they emphasized hitting.

“The pitching up there is going to be better than what we’ve seen,” the coach said.

Win, lose or draw at state, Brooks believes this will be a great experience for her young team. There are only two seniors: Parker Ferrell and Jolley.

“It’s not just one player for us. Everybody plays a role,” Brooks said. “Our girls do what they have to do.”