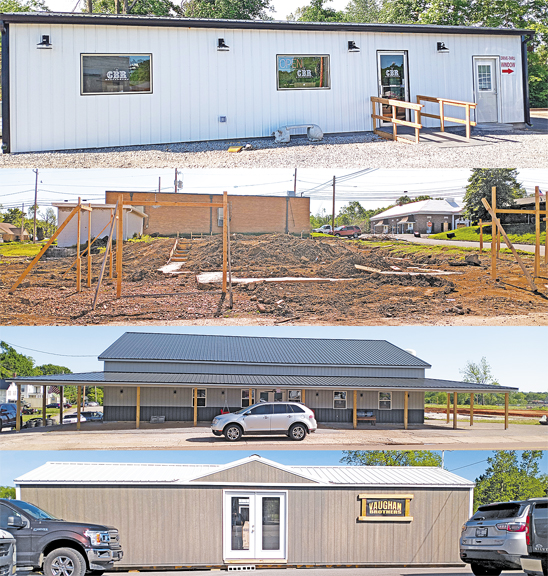 Although much of Dresden’s landscape throughout town looks different after a tornado on December 10, 2021, destroyed homes and businesses, a handful of landmarks are coming back to life. (Top, Down) CBR Restaurant, located on Pikeview Street, has rebuilt and is open for business. The local eatery had moved into the former home of Chad’s Smokehouse and was considered one of the city’s newest restaurants before the tornado event. The restaurant’s sign ended up in Kentucky and owner Steve Pecktol said he has plans to retrieve it. The site of the historic Dresden Cumberland Presbyterian Church on Wilson Street downtown took a devastating hit and the building had to be demolished after the storm. The church is rebuilding on the same plot of land. Donnie Essary’s Automotive on Pikeview Street also suffered extensive damage and had to be demolished. Essary was one of the first businesses to rebuild, saying his customers needed him. He is officially open for business under a new roof, in the same location. Vaughan Bros. Hardware, which was also located on Pikeview Street was leveled in the December storm. Owner Jerry Rachels sold the property to Keith Kemp, who has set up shop on the same property, offering customers some of their hardware needs. There are plans to rebuild the business. Photos by Sabrina Bates/The Enterprise