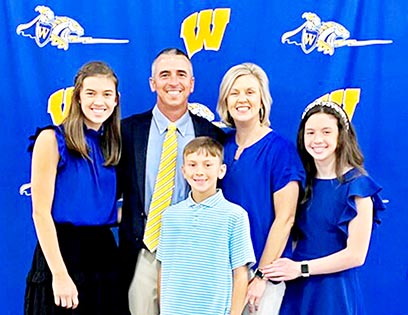 Newly-named Westview boys basketball coach Willie Trevathan was introduced to Charger well-wishers Sunday. He is joined by his wife Leah and children Halle, Lila and Lane. He takes over for Ed Baker. Trevathan spent the last two seasons as an assistant coach for the UT Martin women’s basketball team. He was a teacher, coach and administrator at Greenfield for 19 years. He guided both Yellow Jacket boys and girls teams to the state tournament, winning the girls’ crown in 2018.

MARTIN (May 15) – After two years as assistant coach for the University of Tennessee at Martin’s women’s basketball team, Willie Trevathan decided he needed a change.

Sunday, he was announced as the new boys’ basketball coach at Martin-Westview.

“I really enjoyed the college game and working with Coach McMillan was great,” he said, “but I missed the high school game, the environment and the camaraderie I had with my fellow coaches. I’m excited about returning to that.”

Trevathan takes over for Ed Baker, who took a position in the Central Office for the Weakley County Board of Education.

“Ed left the program in pretty good shape,” Trevathan said. “Now, I want to see what they can do. I told them today (Monday), let’s build this together.”

Trevathan guided Greenfield’s Lady Yellow Jackets to the 2018 Class A state championship and probably would have duplicated the feat in 2020 had COVID-19 not hit. His team was undefeated and had won its state quarterfinal game when the TSSAA pulled the plug on the tournament. Trevathan told his kids, after the news, that they beat everyone on their schedule and did everything that was expected of them. Greenfield was 34-0 that season.

Two of his former players, Chloe Moore-McNeil (Indiana) and Tess Darby (Tennessee) each played in the NCAA tournament this year.

He was principal at Greenfield before he left for UTM. He will return to the classroom as a teacher at Westview. He said being a teacher and administrator each have their challenges, but he’s looking forward to getting on the classroom and developing students, too.

There is a world of difference between coaching girls and coaching boys. This is another area where Trevathan will be challenged.

“What works with motivating girls and with boys are completely different and I’m going to have to adjust to coaching boys again,” the coach said. “But the fundamental approach to coaching doesn’t change. You teach them to work hard, play hard and play hard together. If they do that, we can be successful. ”

Trevathan says he’ll help UTM prepare for its summer camps but will start working with the Chargers next week.

“We’ll have tryouts, we’ll set up our summer camps and I’ll get a chance to evaluate the players to see what they can do,” he said.  “I told them that I know they are winners.  A lot of them played on the (state championship) football team.  They know how to win.”

Trevathan said coming to Westview was a family decision and this would allow him more opportunities to see his kids play. The school isn’t far from his home and his kids transition to Westview from Greenfield should be smooth.

“I want to thank Coach McMillan and (UTM athletics director) Kurt McGuffin for the opportunity and for two great years,” he said. “I also want to thank the Weakley County school system and (director of schools) Randy Frazier for welcoming me back and giving me this opportunity. ”

Trevathan accrued a 383-160 mark as a coach at Greenfield and was seven-time district coach of the year. Trevathan went to Gleason High School where he played basketball and represented the Bulldogs at the state golf tournament. He went to Union University on a golf scholarship.