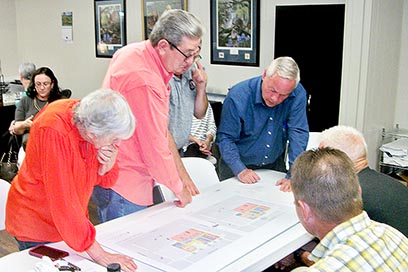 On May 10, Members of the Dresden Board of Mayor and Aldermen reviewed preliminary drawings for a new, proposed, municipal complex to replace the city’s police department, city hall and fire station destroyed in the December 10, 2021, tornado.

DRESDEN (May 10) — The status of plans being developed to construct a municipal complex was a major topic of discussion during a called meeting of the Dresden City Board on Tuesday, May 10.

Dresden board members discussed plans and reviewed preliminary drawings for a proposed municipal complex building, which would incorporate a new fire department, city hall and police department underneath a single roof. Whatever type of structure the board eventually decides to erect, plans call for the complex to be built at the same downtown location on the court square, previously occupied by these city offices, before they were destroyed by the December 10, 2021, tornado.

The floor plans, which remain a work in progress, began with generic municipal complex diagrams utilized by other cities. The layout of the building is being developed with input from all city department heads, and may undergo several changes before finalized.

Since the proposed complex is said to be utilized for decades, Mayor Jeff Washburn noted the plan should not only reflect the city’s current needs, but its anticipated needs for many years to come.

Washburn stated he has contacted landowners with properties adjacent to the lots owned by the City of Dresden, which previously housed Dresden’s fire department, city hall, and police department. Some of these property owners are deeding their land to the city, rather than keep the lots and incur the cost of debris cleanup and removal. Some have offered to sell their properties at reasonable prices, while others are retaining ownership of their lots with plans to rebuild.

The municipal complex’s footprint will partially be determined by the amount of adjacent property either donated or sold to the city. Dresden has already acquired property on South Poplar Street, including the former location of Poppi’s Pizzeria and a storage building on an adjoining lot, which were donated by Jeff and Jennifer Washburn. Additionally, District Attorney Tommy Thomas donated the property where his former law office stood on East Main Street.

Frank Peeler, Keely Wilson Nanney and Dickie Hutcherson DDS have expressed interest in selling their properties to the city, according to the mayor.

The acquisition of these properties will transfer ownership of the majority of the entire city block to the City of Dresden, which will provide space for the construction of the municipal complex underneath a single roof, while leaving ample space for public parking.

A couple of Dresden landowners decided to retain their properties. They are Tony E. Winstead, who owns a lot located on the corner of East Main and South Wilson streets (site of the former Majestic House Restaurant); and Stephanie Kemp, owner of the property where The Flower Box previously stood on East Main Street.

A portion of the property being retained forms a small “dog leg” of land, which does not give the city sufficient space to have a fire station with drive-through doors. Unless this parcel of land can be acquired, plans for a drive-through fire station will have to be amended to a one-sided entrance.

As previously discussed during the May 2 board meeting, Mayor Washburn noted it would be cheaper to construct a single municipal complex instead of three separate projects.

The proposed building features common areas utilized by the various departments, as well as the general public. This includes a 1,352 square feet multi-purpose courtroom, which would also be used for Dresden City Board meetings and other public gatherings.

A large section of the building, dedicated for use by the fire department, houses a 4,800 square feet apparatus room for storage of fire trucks, an emergency response vehicle and a brush truck. It also features showers (decontamination and regular), decontamination room, clean room, and a compression room (where air bottles are filled), day room, and sleeping quarters for the fire chief and other firefighters. Storage areas are allocated for: turnout gear, vest storage, tools and general storage.

A training room could be shared by the police and fire departments.

The facility also contains an emergency generator room, to provide electricity in the event of a power outage. The backup energy source will ensure radio communications can continue to dispatch emergency police, fire, and medical services.

During the board’s May 2 meeting, Mayor Washburn stressed the need to develop plans for the municipal complex and to begin construction as soon as possible, due to the skyrocketing price for building materials.