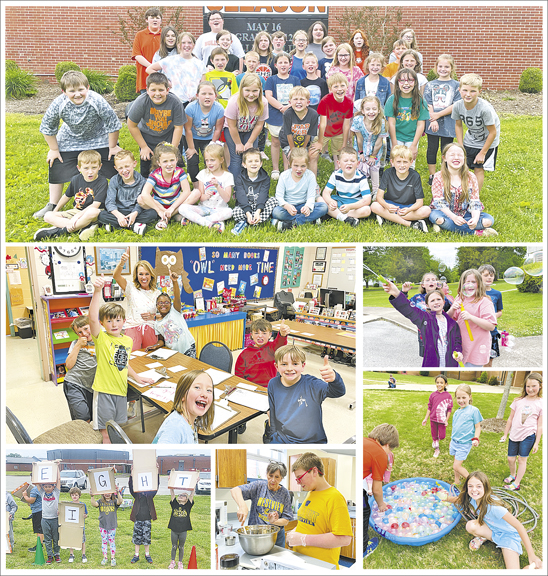 WEAKLEY COUNTY (May 12) – More than 500 students took part in the Weakley County Schools After School Scholars program that concluded on May 4. While formal data is not yet in, a first glance at recent screening and anecdotal evidence has organizers and teachers at each location giving the program high marks.

“This has been great. Their confidence is up. They are doing so much better,” said Becky Jackson, lead teacher at Martin Primary where 60 students took advantage of the optional program. “The kids love it. The teachers love it. The parents love it. It’s been fabulous.”

Jennings Wilson is one of those pleased parents. In a thank you note to Jackson and the MPS tutors she acknowledged having worked with her son for the last couple of years on beginning reading strategies that “seemed to lead only to frustration for both of us.” After his participation in After School Scholars, she said, “I have seen dramatic growth in both his confidence and ability level while reading. I am so very appreciative to all who have been involved in this program.”

The After School Scholars’ faculty of 114 current, retired and student teachers as well as educational assistants worked individually and in small groups with students in grades 1-12 on identified deficits. Tutors were enlisted in the fall and trained in January for the twice weekly 90-minute focused times of working on homework and then focusing on areas classroom teachers had identified as areas of need.

Angie Rushing, the director of the Elementary and Secondary Schools Emergency Relief (ESSER) 3.0, oversaw the 16-weeks of concentration on English Language Arts for grades 1-4 and math for grades 5-12. She said the ratio of one tutor for every four students proved to provide the individualized attention that many students needed.

“At a cost of nearly $100,000, the program was definitely a substantial investment,” she said of the federal funds provided to address potential COVID learning loss. “However, that works out to approximately $200 per student in our case, and based on what I’m hearing, we anticipate that the return on that investment will be high. Students have gained needed confidence which we believe will translate into success in the classroom.”

As a reflection of the gains achieved, she points to the most recent universal screening by younger students which indicates that After School Scholars whose prior work suggested they could easily fall behind are now performing at the same level as their peers.

Assistant Principal Tiffany Frazier served as the lead teacher at Martin Elementary. She said that recent screening already indicated improvement. She underscored a great contributor to that improvement was communication between the tutors and classroom teachers.  She also noted that the experience has helped to relieve stress in both students and families.

“It’s been more relieving not to do all the homework and studying at home,” she explained. “When they get home, they are able to enjoy themselves with their parents and their families. They don’t have that worry.”

High school students’ focus on math saw Westview lead teacher Kimberly Elliott and tutors turning to the kitchen to make concepts like fractions relevant. In the final days of the program, the students divided into party planning teams, worked with a set menu, determined what their party needed for one appetizer, one main dish, one dessert, looked at ingredients and came up with a shopping list. They then checked current prices, adjusted for inflation, factored in employees’ time, and then created a marketing pitch to pitch their concept to teachers. On the final day, they put learning in action as they followed recipes to bake cookies.

Along with homework, Elliott and four teachers assisted students with Algebra I & II and Geometry with Algebra II students focusing on ACT prep and others concentrating on deficits.

Rachel Abbott was lead at Dresden High School. She observed, “The After School Scholars Program was something that our students at DHS really needed. We had students of all learning levels come to receive tutoring so they could better excel academically. The students showed tremendous growth in the classrooms; I can’t wait so see how much more they accomplish!”

While the program’s primary objective was to address academic losses as the result of the pandemic, fun was another direct result of the additional time spent together. On the final day, for example, students worked on word play and math problems to solve escape rooms and scavenger hunts. Pizza boxes were turned into letters that held the mixed-up answers to key questions. Bubbles, sidewalk chalk, and painting rocks were deployed as well as rewards like sundae buffets, cake, pizza, and homemade cookies.