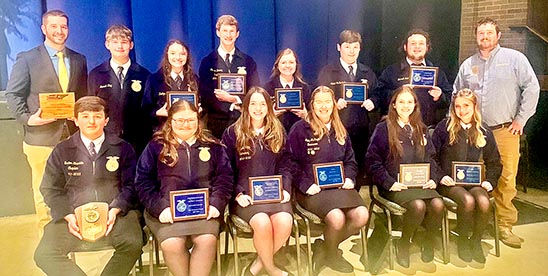 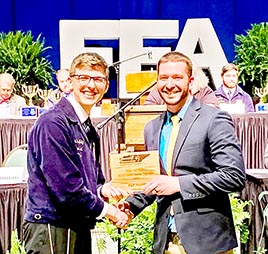 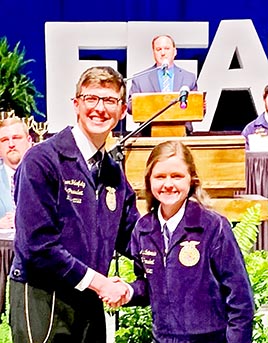 Westview’s current Vice President Abigail Colarullo was named the West Tennessee Regional Secretary. After completing the application process which included a test, essay, and interview, Colarullo claimed the position. In her new official capacity, she closed the ceremony in Jackson and will soon turn her attention to helping plan the Green Hand Conference, an orientation for freshman FFA members.

Westview Advisor Kyle Rogers received the recognition by his peers as the 2022 Turn the Key Teacher of the Year. Rogers came to Westview two years ago from having previously worked at then MTD as a team leader. A graduate of the University of Tennessee at Martin, he is now working toward a Masters in Secondary Education, which he hopes to receive in May.

“I’ve always wanted to be a teacher,” the Dyersburg native and now Martin resident explained of his circuitous path in ag business before accepting his first teaching role at Westview. He counts his high school ag teachers as among his biggest inspirations.

Rogers has 75 students enrolled in one of three classes he offers – Small and Large Animal Care, Ag Power Equipment, and Ag Mechanics.

Jonathan Holden, FFA advisor in Dresden, was named the Outstanding Early Career Teacher for 2022. In his 5th year at Dresden and 7th in education, he teaches 101 students Ag Mechanics and Plant Science.

In response to how many years he had been instructing at DHS, he calculated the time by reviewing the FFA presidents with whom he had worked.

“I’m still young enough that it’s not so many I can’t remember,” he joked.

The Dresden resident earned two associate degrees at Dyersburg State Community College, a bachelor’s and master’s degree from Murray State University and earned his teaching credentials at the University of Tennessee at Martin. He is an adjunct professor at DSCC and the ag columnist for Southern Traditions Outdoor Magazine.