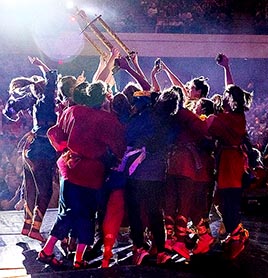 In addition to Friday and Saturday shows, local elementary schools were once again treated to a free performance on Thursday, a tradition that had been discontinued in 2020 and 2021. The theme of this year’s production, “No Turning Back,” evidenced a clear determination to continue Makin’ Music for a live audience.

“Makin’ Music has been a student-run show from the beginning,” Makin’ Music Producer Tony Allen said. “We have student staff and student directors; students are what make Makin’ Music happen.”

“Moments like Makin’ Music remind us just how wonderful the relationships built at Freed-Hardeman are,” Shannon said. “We’re grateful for the talent of our students and lifetime memories that are made because of Makin’ Music.”

More information is available at http://fhu.edu.