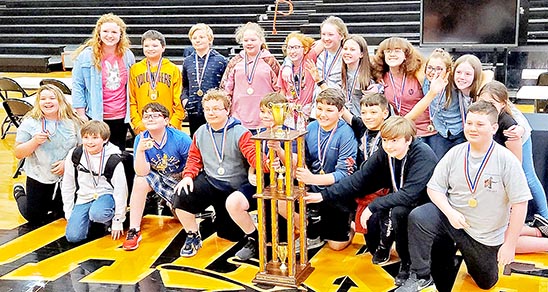 GREENFIELD (April 6) – Greenfield Principal Jeff Cupples calculated that while basketball fans’ eyes were focused on March Madness, elementary and high school students could be persuaded to try some March Mathness as the month closed out and before TNReady testing begins.

Just as brackets in college basketball slowly revealed the country’s best, fourth and fifth grade students in Greenfield competed against each other and then took on Algebra II students for the ultimate prize.

In the first round of play, the younger “mathletes” faced off in the gymnasium surrounded by fellow students and the prize trophy. With tablets in hand, they engaged in multiplication problems in Blooket Race Mode, an online learning game program that rewards students for both the accuracy and speed of their answers while earning powerups which can be used to sabotage other players or boost their own progress.  Each student’s performance contributed to the team score, and the team with the highest total score won the round.  A team had to win two out of three rounds to advance to the next bracket.

Teams, coached by their teachers, named themselves. Fourth grade teams were the Fighting Ninjas coached by Jan Mitchell and the Cool Phoenixes coached by Abby Huffstetler. The fifth-grade teams included the Nice Nuns coached by Layla Forsythe (assuming the role from the retiring Missy Galey) and the Fast and Furious Fighting 5th coached by Beverly Williams.

After the bytes and beeps settled the Nice Nuns emerged as the March Mathness champions and were presented with a large trophy that they will keep in their classroom until next year when the trophy will be awarded to the next champion.

However, the competitive play did not end with the assumption of the trophy.

After claiming their prize, the Nice Nuns had to face a mystery opponent — the Genius Juniors made up of Algebra II students – for the ultimate challenge.

Weakley County Schools’ elementary math coach Megan Moore and middle and high school math coach Wes Morgan attended the event and reported the fourth and fifth grade students who did not win the championship became the cheering crowd in support of the Nice Nuns.

“And cheer they did!” said Morgan. “’Let’s go Fifth Grade!’ was chanted while they stomped the bleachers in rhythm.  It reminded me of a crowd getting loud during foul shots in a big basketball game.”

Moore shared that one of her favorite moments was watching members of the Nice Nuns holding hands while waiting for the results of the final of three rounds.

Though the rounds were close, the Nice Nuns and their mastery of multiplication proved victorious over the older students.

“When the verdict was delivered the entire gym went wild!” Moore said. “It was a great experience for everyone involved and students were genuinely excited about math!”

Principal Cupples is already looking ahead.

“We will be going bigger and better next year,” he said.