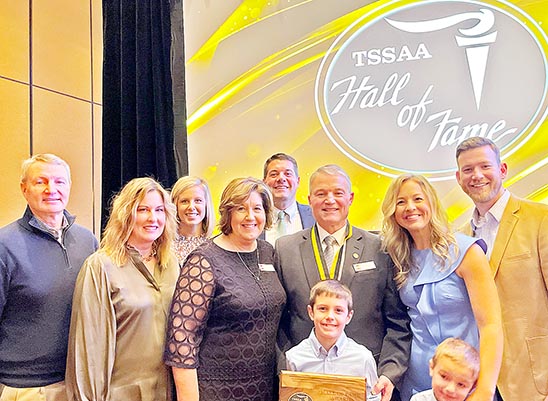 SHOWING SUPPORT – Several members of the family of Weakley County Director of Schools Randy Frazier were in attendance Saturday in Murfreesboro to witness their loved one being inducted into the TSSAA Hall of Fame. They were (L to R) Keith Frazier, his fiancé Beth Jones, daughter-in-law Tiffany Frazier, Terry Frazier, son Dusty Frazier, Randy Frazier, daughter Jenna Verdell and husband Conner Verdell. In front are grandchildren Beckett Frazier and Briggs Frazier. Not pictured were son Preston and daughter-in-law Hollie Frazier. 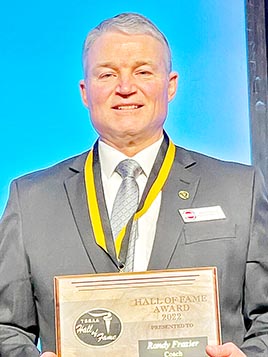 MURFREESBORO (April 2) – Randy Frazier was a pretty fair baseball player back in the late 1970s.

He didn’t want to go to college after high school, so instead, he worked and got married.

Then, he had a pretty good night in a Dizzy Dean League game against a team of UT Martin players and was approached about playing for the Pacers.

Then he and his wife Terry became parents. He went to work at MTD in Martin, but stayed in school. When he graduated, he became a coach at Gleason School. He became school principal along the way.  After 20 successful years there, he was named Weakley County Director of Schools.

Frazier built Gleason girls basketball into a perennial of contenders, winning three state championships, one runner-up trophy in nine state appearances. He won more than 600 games with the Lady Bulldogs.

“I’m humbled and honored,” Frazier said. “But I wouldn’t be getting anything like this had it not been for having great players and great teams.”

When he took over the program, he had no idea that his path would lead to the TSSAA hall of fame. He just wanted to beat the rivals.

“I asked the kids what goals they had and they said they wanted to beat Dresden, Greenfield and McKenzie. Those were our rivals,” he said. “Bradford wasn’t even mentioned.”

That’s probably because Bradford had beaten Gleason by 40 or more points twice during the prior season. Suddenly, things fell into place. Gleason was beating the rivals and had played Bradford within single digits.

“We decided getting close wasn’t good enough anymore. We don’t want to just be close, we want to start beating those teams.” Frazier said. So, in mid-February of 1987, Gleason topped Bradford, who was ranked in the top three at the time, and thus started a great rivalry between Gleason, Bradford, Frazier and his mentor David Russell.

“Bradford was the measuring stick back then,” he said. “All those packed gyms, all those Miss Basketball winners, all those state championship teams and runners up, it was something special.”

And to think it almost didn’t happen for him.

“I wasn’t their (Gleason’s) first choice,” he said.

Gleason was about to hire a candidate who instead opted to take a job in Texas.

“I sort of lucked into it,” Frazier said.

And, for the Gleason fold, fortunately, it worked out quite well.

Frazier also wears another name tag, that of cancer survivor. He was diagnosed with thyroid cancer the summer before the 2006-07 basketball season and there was a lot of uncertainty.

“Who knows, if I’d have continued, they might not have caught it in time,” he said.

Frazier beat it in time to guide his daughter Jenna and the Lady Bulldogs to the 2007 state title.

“The 2007 team was special because I was able to coach my daughter Jenna. It’s hard to coach your own kid because you are harder on her than the other players,” he said. “That whole tournament seemed to go in slow motion. It was eerie, but it was like I was able to predict what was going to happen.”

Frazier said reaching his kids and getting them to buy in was probably the most satisfying aspect of his tenure.

“As I look back, I was proud that I was able to see the potential in the kids more than they saw it themselves,” he said. “And then to get them to push themselves to go higher than they thought.”

As Frazier reflected on his recent induction, he thought about his former players.

“I just hope my former players are proud because none of this would have happened had it not been for them,” he said.

Frazier’s career in coaching, teaching and serving as director of Weakley County Schools includes a list of accomplishments. Combined, Frazier was head girls’ basketball coach for more than 20 years at Gleason High School and Junior High School. He served as principal at Gleason schools for 14 years. He’s amassed more than 600 career victories, which included nine state tournament appearances, three TSSAA state championships (1992, 1999, 2007) and one state runner-up finish. Frazier has been Director of Weakley County Schools since 2009. Recently, the new gymnasium floor at Gleason High School was named in his honor. He currently serves on the TSSAA Legislative Council as an Ex-Officio member representing TOSS.