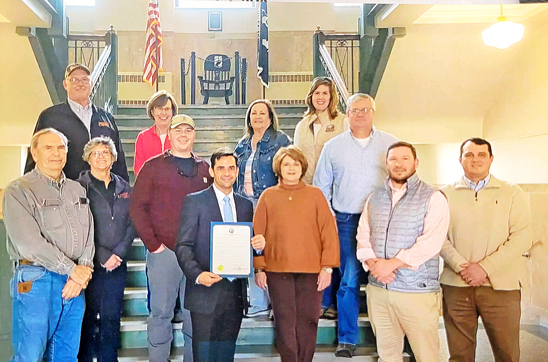 WEAKLEY COUNTY (March 22) – Established in 1823, agriculture has played an important role in the history of Weakley County. Its first row crop was corn, and by 1880, it was the state’s largest corn-producing county. The abundance in corn eventually led to an increased production of cattle and hogs. While pioneer farmers were said to engage in cotton production as soon as the land was cleared, county farmers steadily reduced the cotton acreage in the late 19th Century.

Since 1960, soybeans have taken the place of cotton in terms of agriculture production and has become the county’s leading row crop. The first tobacco crop in the county was reportedly planted in 1832. In 1980, Weakley County farmers planed 138 acres of type-22 western, dark-fired tobacco.

Sweet potatoes became a major crop by 1850 in the county (Gleason was known as the sweet potato capital, thus earning its “Tater Town” namesake.), with 45,180 bushels produced that year. In 1944, Weakley County ranked 10th in national production of sweet potatoes.

In the early settlement days of the county, farmers grew wheat, rye and oats to supply family and livestock needs. Farmers today now grow more wheat in a three-way rotation between wheat, soybeans and corn.

By the 1950s, dairying had become one of the major agricultural activities, but reportedly, pressure on pasture land as it is converted to soybean production has resulted in the decline of dairying. The county continues to be one of the top swine producers in the state.

The latest USDA Ag Census (2017, conducted every 5 years) shoed farmers in Tennessee grew and sold $3.8 billion worth of agricultural products – just over 30 percent was from the sale of cattle and poultry and nearly 30 percent from corn and soybeans.

The top five counties in terms of agricultural sales were Bedford, Weakley, Robertson, Obion and Gibson. These counties make up 19 percent of Tennessee’s total agricultural revenue. The USDA is preparing for another Ag Census this year. June 30 is the last day for farmers to sign up to participate in the Ag Census, which is set to begin November 6.

Weakley County is home to more than 30 Century Farms. The Tennessee Century Farms Programs, administered by the Center for Historic Preservation (CHP) at Middle Tennessee State University, identifies, documents, and recognizes farms owned by the same family for at least 100 years. To date, nearly 1,400 farms have been certified in the state.

Century Farm listings for Weakley County include the following:

To read more about the impact of agriculture on Weakley County and families that are committed to farming, see Pages 1B and 4B of today’s issue.