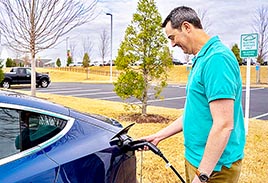 Thanks in part to support from Union City Energy Authority, the museum and heritage park was able to install four, level two EV charging stations onsite. These will supply up to 25 miles of distance for each hour the chargers are plugged into the vehicles. The chargers are located in the lower south parking lot behind The Train Depot and will be available on a first-come, first-served basis during Discovery Park’s regular operating hours and during special events.

“Those of us at Discovery Park are always looking for ways to contribute to a reduction in our carbon footprint and provide services our guests are looking for,” said Scott Williams, president and CEO of Discovery Park. “We are very grateful for Union City Energy Authority’s generous support of this project so we could make it happen for visitors to Obion County.”

These chargers will be filling a need for EV charging stations as currently there are only two in Union City and two in nearby Martin on the campus of the University of Tennessee at Martin.

“I know how often visitors to our area stop at Pediatric Place to charge their cars,” said Dr. Bates. “I’m grateful to see Discovery Park is working to make this a better, brighter and greener community.”

Over the next several decades, the U.S. will change over largely to zero-emission vehicles if global climate goals are to be met. Currently, electric vehicles make up only a small portion of the automobiles sold worldwide, but that is changing quickly. According to BloomburgNEF, sales are now growing due to a combination of policy support, improvements in battery technology and cost, more chargers like the ones at Discovery Park being built and new models coming from automakers.

For example, Ford Motor Company recently announced a planned automotive assembly complex about 80 miles south of Discovery Park in Haywood County. Blue Oval City will be operated by Ford Motor Company and SK Innovation, and is expected to be operational in 2025. The facility will primarily consist of an automotive assembly plant that will produce electric Ford F-150 Lightening pickup trucks and a plant that will manufacture electric vehicle batteries, as well as a battery recycling facility, suppliers and a training center.

Visitors with electric cars can find Discovery Park’s charging stations on the Plugshare and ChargeHub apps and other places chargers are listed.