Dresden Lady Lion Maggie Oliver takes her shot Friday against Wayne County when the girls’ basketball team vied for the TSSAA Class 1A state championship title. Dresden finished in the top four in the state in its division. Photo by Melissa Oliver Overton 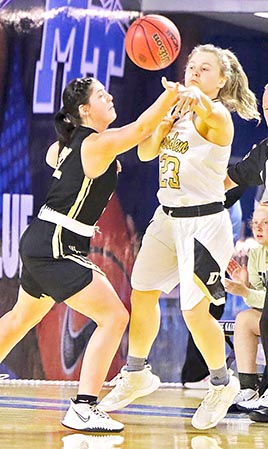 MURFREESBORO (March 11) – Make no mistake, Wayne County has a pretty good girls basketball team, but when you do the damage it did at the free throw line Friday, it’s almost unfair.

The Lady Wildcats almost accomplished a state-tournament record by hitting 31 of 33 free throws as they topped Dresden 76-55 in the Class A semifinals at Murfreesboro.

Wayne County exploded from the opening tip and outpaced Dresden 17-6 in the first five minutes of the contest. The Lady Lions found themselves down by 18 in the second stanza and struggled to find solutions to Wayne County’s attack.

“They kind of punched us in the mouth at the start, got us on our heels and we got trying to play catch up,” said Dresden coach Jonathan West. “In the second half, we’d cut it back and they hit a three at the buzzer. They had more depth and more bodies to put the ball in the basket.”

Dresden made a few small runs at Wayne County only to be turned away. The Lady Lions drew within 12, 44-32, on Lucy Curry’s bucket with:18 remaining in the third, but Savanna McClain drained a triple at the horn to boost WC’s lead to 15 heading into the fourth period.

In the final frame, Dresden cut it to 11, 60-49, with 3:15 to play after Maggie Oliver’s triple. Wayne County replied with 9-0 run to inflate the margin to 20 points with just over a minute to play.

“This is the furthest we’ve ever been, so this was an accomplishment,” West said, underscoring the fact that his team was 7-14 a year ago.  “We have to remember how we feel right now and remember it when we’re in the gym this June, July and August and try to get better.”

Dresden returns everybody from a semifinal team that finished 25-9.