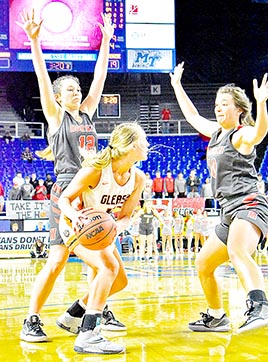 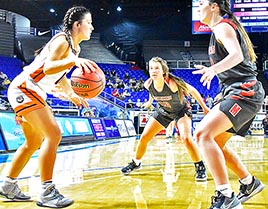 Gleason’s Alayna Anderson and Miss Basketball Class 1A finalist, looks to get around McKenzie Lady Rebels Briley Auvenshine (foreground) and Dani Dyer during the teams’ match up last week in Murfreesboro vying for the TSSAA Class 1A state championship title.

MURFREESBORO (March 11) – Gleason has three gold basketballs gathering dust on its trophy case, but they were getting lonely.

The Lady Bulldogs last reached, and won, the state tournament 15 years ago. McKenzie was just trying to join that elite club.

Friday, the Lady Rebels took a closer step to realizing their dream by excusing Gleason from further play, 58-46.

In their January meeting, Gleason trailed by 17 before making it a close game. Still, the Lady Rebels prevailed in that one.

Gleason demonstrated it was in it to win it and pestered the top-ranked Lady Rebels for much of the game.

Lady Rebel Miss Basketball finalist sophomore Savannah Davis imposed her will, scoring 24 points and securing nine rebounds to lead her team to the win.  She shook off her struggles in the quarterfinals to break through.

“Last night (vs. North Greene), I did not shoot very well, so tonight, I was more determined to get to the rim and that’s what I did,” said Davis. She was 9-15 from the floor and 5-5 from the free throw line.

Gleason’s Miss Basketball finalist, Alayna Anderson, was hampered by foul trouble, which affected the trajectory of Gleason’s scheme. She was called for her second foul and came out of the game.

“When I came out, I feel like they made a short run, but we cut it back,” Anderson said. “Once they made their last runs, we were hard pressed to stop them. We couldn’t make enough stops.”

McKenzie and Gleason ended the first quarter tied at 13. Lady Rebel senior Dani Dyer opened the second with four points to give her team 17-13 lead, but Gleason surged back with a personal three-point flurry to cut the lead to one.

Late in the second, Dyer and Briley Auvenshine each drilled triples to propel MHS to a 27-19 lead at the break. Gleason stayed in it, but never got closer than four the rest of the way.

Carrington Lifsey led Gleason with 19 points. Anderson tossed in 14, despite her foul issues.

McKenzie advanced to play Wayne County in the championship, where they claimed the TSSAA Class 1A State Championship title Sasturday, while Gleason finished its season with a 26-8 mark.