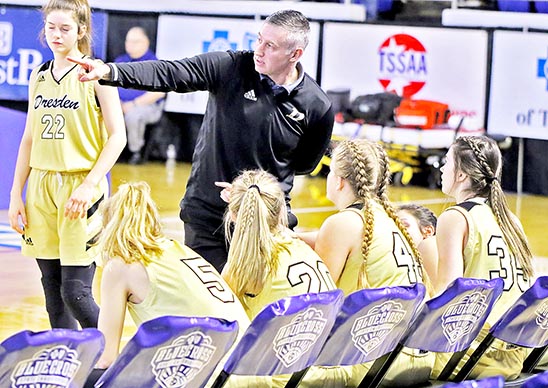 Dresden Lady Lion Coach Jonathan West rallies the team during its Thursday morning match up against Van Buren County as the teams vied for the TSSAA Class 1A state championship bid in Murfreesboro. The Lions were ranked among the top four in the state. Photo by Melissa Oliver Overton 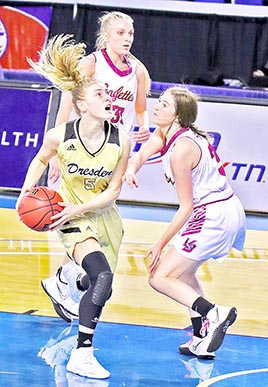 Dresden Lady Lion Lucy Curry heads to the basket in a match up against Van Buren County Thursday morning in Murfreesboro in the Lions’ quest to bring home the gold ball in the TSSAA Class 1A state championship. Photo by Melissa Oliver Overton 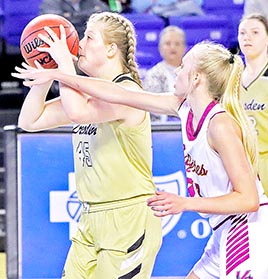 MURFREESBORO (March 10) – Dresden’s Lady Lion basketball team took a while to get going, but once it did, it easily advanced to the state semifinals.

The decision marked the first time Dresden moved into the state semifinals.

Van Buren took an early 12-10 lead to start the game. With 6:30 left in the first half, Keely Mathis’ jump shot gave Dresden a 14-12 lead, a lead the Lady Lions wouldn’t relinquish.

Haylee Jarred hit two triples in the final 3:40 to twice extend Dresden’s lead by four, but Van Buren wouldn’t go away. Kaytlin Crain landed a three with :22 remaining in the half and Dresden took a 20-19 lead into the locker room.

In the third quarter, Riley Scoggins connected to cut Dresden’s lead to two. 25-23, with 4:00 to play. This is when Dresden started to put distance between it and the Lady Eagles.

Maggie Oliver buried a triple for a five-point advantage, then Lucy Curry turned a steal into a layup with :37 left, and Dresden led 33-25 after three.

Oliver drilled two threebies in the first 90 seconds of the fourth quarter, then Paisley Pittman connected on free throws. The rout was on. Dresden had increased the margin to 19, the largest of the game.

Pittman was tops for Dresden with 21 points and 11 rebounds. Oliver and Curry each had 11 points. Mathis collected nine rebounds.