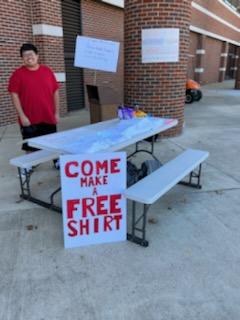 A group of young adults were inspired to spread the message of “fight poverty, not the poor,” when sparked by some quotes by Dresden Mayor Jeff Washburn in a recent issue of the Weakley County Press concerning the community’s rebuild and the mayor’s vision for the future of the City of Dresden in the aftermath of a tornado that hit the town December 10, 2021, destroying 187 homes and 21 businesses. The group is offering rides to next week’s town hall in Dresden and offering community members an opportunity to decorate T-shirts that represent their walks in life, in front of the Boling Center on the University of Tennessee at Martin campus today.

MARTIN (March 2) – Recent comments reportedly made by City of Dresden Mayor Jeff Washburn has sparked a movement by community members, particularly young adults, with a message asking support to “Fight Poverty, Not the Poor.”

Kiya Simmons, a University of Tennessee at Martin sophomore from Sparta, Tennessee, was inspired recently to take a stand, form a committee and prepare for an upcoming town hall forum next week in Dresden.

The movement began as a result of comments by Washburn published in a recent article of the Weakley County Press. Press Reporter Shannon Taylor penned an article, “The future of DBA hangs in the balance,” in the Tuesday, February 22, 2022, edition of the local paper. During the meeting, Mayor Washburn offered an update on the future of the community and was directly quoted from the Dresden Business Association meeting and those comments stirred a response in Simmons and others in the community.

“I think we are going to be in better shape, but one thing we’re not going to have is $200 to $300 rentals, but more like $400 to $600 because houses built back will be good houses,” Washburn said in the article. “A lot of lower budget houses were destroyed and you’re going to get higher rent. We talked to Martin Housing to see if they might look at bringing some more apartments here which will give you some low rent, but you have to question, and this is sort of a Catch-22, do you want the low rent and the people that rent from those or do you want higher scale of housing and the higher level of prosperity that those people will bring,” he continued.

“We need some senior housing in Dresden as well, and we’re looking at that too. I think that midlevel rental is where we should target. There’s going to be some high-scale housing built as well, but next year it’s going to look a lot different in Dresden,” Washburn added.

As a result of those statements, Simmons and her comrades formed a committee and took to action to advocate for “all people of Dresden.”

Wednesday, on the UT Martin campus in front of the Boling University Center, Simmons was joined by her fellow committee members, Noah Smith, Daniel Dominguez, Emily Hailey, Sea Woods, Alexandria Bryson and Victoria Wiggins, with tables set up to decorate white T-shirts. The free T-shirts are being designed by interested community members to represent their walks of life. Simmons explained one shirt might read, “I’m Upper Class and Never Had to Worry About Paying My Bills,” to Middle Class to Lower Class to even Homelessness. Of the 27 original T-shirts purchased to hand out Wednesday, by that afternoon, none were left until someone volunteered to purchase more T-shirts to be decorated for the cause. The group plans to man the tables in front of the UC today (Thursday, March 3) from 10:30 a.m. until 4 p.m.

Simmons said there were several UTM students who are Dresden residents and they have joined the community action by decorating a T-shirt to wear the night of the planned Town Hall forum. She said the goal from this two-day event is to distribute information, spread the word about the planned town hall, and gather lists of people who may need a ride to the event next week. A carpool list is being gathered to help get people to the town hall, donned in their T-shirts designed by the individual to represent their status. When asked why T-shirts, Simmons said signs may be problematic and could be taken away, but “they can’t take the shirts off our back.”

People are welcome to visit their tables on campus today to design a free shirt, share ideas and express concerns. Committee members are gathering questions to ask for the Q & A Session of the Town Hall. There is also a sign-up sheet at the tables on campus for additional information. Community members are invited to be a part of the “driving force” to support all people of Dresden and their future.

The message of representation for all community members of Dresden is hitting social media as well. Simmons has approximately 35,000 followers on TikTok. In addition, a Group Me has been set up for those interested in joining the conversation.

To further elaborate on those statements, Washburn said there is nothing wrong with poor people and he has plans to incorporate low-income and senior housing back into the community. He said when he spoke of not wanting to rebuild rental property ranging from the $2-300/month, he said that type of housing attracts criminals and drug dealers or those with lifestyles that are counterproductive to a community. He said he wants to appeal to lower- and middle-class citizens.

“I am committed to the people of my community. I am listening to what my community members tell me they want to see,” Washburn said. He said a vision of his is to see Dresden grow into a “bedroom community” for UT Martin, adding the town has lower tax rates than others in the county, adding if Dresden were attractive to UTM faculty, the community could benefit from more access to the arts and overall improving the quality of life for its citizens.

The Community Town Hall, co-sponsored by the Weakley County, TN Government and City of Dresden, is set for Tuesday, March 8, from 6-8 p.m. in the gymnasium of the Dresden Middle School, located at 759 Linden St., in Dresden. Updates will be given by local elected officials. A Question & Answer Session and open discussion regarding tornado recovery are planned for the event. Community members are invited to attend, particularly those impacted by the December 10, 2021, tornado event in Weakley County. 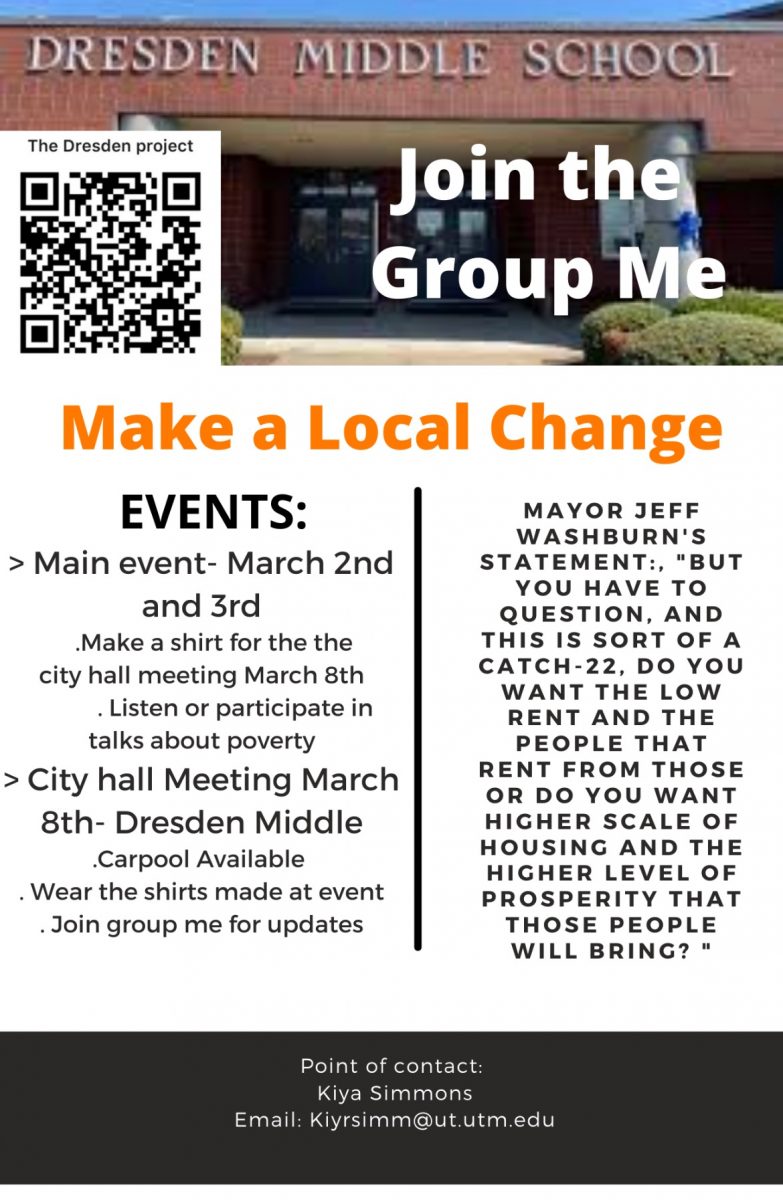