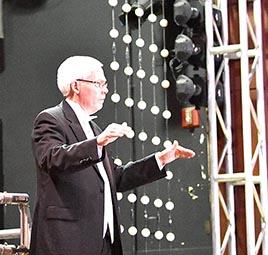 Members of the Westview Band are participating in numerous fundraising events to help pay for the group’s trip to Universal Studios in Orlando, Florida, where they are scheduled to perform. The group is led by Mike Tucker.

MARTIN (March 1) — Organizers are hosting fundraisers in an effort to raise enough money to cover the cost of Westview High School Band’s upcoming trip to Universal Studios in Orlando, Florida, where they are scheduled to perform.

Westview Band Director Mike Tucker states the band will leave for the trip early Saturday, March 19, which is the first day of spring break, and return late on Wednesday, March 23.

“We’ll be performing in a parade at Universal Studios,” Tucker said. He noted the band members will have two days to spend in the park during their trip.

“The students are responsible for paying their way, but we have fundraising events every year, and the funds go into their trip account.”

“It’s a good opportunity to give the young people of Weakley County exposure to the rest of the world, and it puts a good light on our community,” Tucker said.

“We appreciate everyone in the community that has reached out and lent a helping hand in helping these students to make this trip.

“We hope to give a good showing for Weakley County when we perform,” Tucker said.

According to Martin parent, Priscilla Price, whose 16-year-old daughter, Gabrielle, is a member of the Westview Band Color Guard, band members recently partnered with Martin Energy and Nutrition, which sells protein shakes, and other health treats, in order to raise funds for the trip.

Price states the business even created a drink for the fundraiser called “Sound of the Chargers” and the students received 10 percent of the sales for that day. Martin Energy and Nutrition sold 372 drinks during the event. This was close to matching the highest number of shakes the business has ever sold in a single day, which totals about 400 drinks.

Band supporters also partnered with Rolling Smoke BBQ & Catering of Martin, which is a Martin catering business operated by Jason and Misty Menes.

“Rolling Smoke did a phenomenal job in supporting us,” Price said. She noted band members sold a total of 375 BBQ tickets for the meals costing $10 each, after which they received a portion of the profits.”

Price says Gabrielle, who is now a sophomore, became a member of the band’s color guard in her freshman year.

“When we realized our funds would fall extremely short, Gabrielle began baking and selling baked goods to friends, family and others to help raise money for the trip,” Price said. “She’s been advertising on Facebook and Instagram concerning the bake sale. She has sold quite a few bakery items; otherwise, she could not afford to go on the trip.”

Concerning upcoming fundraisers, Price noted she has contacted several businesses, but has not yet heard back from them. So, there are currently no fundraising events planned between now and the day of their departure.

Price estimates approximately half of the students will be deficient in their funds, as the situation currently stands.

“Our funds are deficient, and the fundraisers are greatly needed to help pay for the expenses of the trip. The trip costs approximately $750 per student, and $700-$800 for each parent and chaperone. There are 59 band students planning on going, plus chaperones, which include teachers, parents, grandparents and siblings.

While there, the band will perform at Universal Studios.

The students normally go on a big band trip every four years, but the band didn’t get to travel very much the last couple of years, due to COVID restrictions.

The students, who are about to graduate, missed out on band trips, so she thinks that is why the trip was bumped up a year. “Because of COVID, the students we’re not able to compete in band competitions the past few years,” Price said. “COVID also prevented the band students from hosting fundraisers to raise money for the trip.”

Those wishing to help the band members raise enough money for the trip may drop off their donations with Librarian IT Coordinator Jessie Newsome, who serves as president of the Westview Band Boosters, or Youth and Children’s Librarian Jenny Claiborne at the Martin Public Library, located at 410 South Lindell Street.

Also, checks made out to “Westview Band Boosters” and mailed to Westview High School, qualify as charitable donations and are tax deductible. Send letters to: