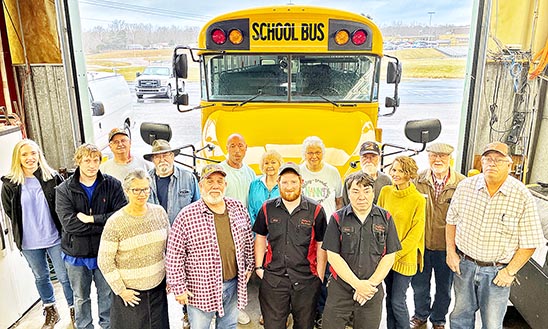 WEAKLEY COUNTY (February 18) – National headlines continue to underscore the school bus driver shortage, and stories abound about cancelled routes across the state. In Weakley County, while diesel technicians and the director have been pulled away from their regular duties to get behind the wheel every week of the school year to fill in – a rare occurrence in years past – the routes continue to be covered and children are safely transported from home to school and back each day.

Tuesday, February 22 marked School Bus Driver Appreciation Day, something that the pandemic and a growing set of regulations has made even more critical as administrators grapple with not just how to recruit new drivers but how to retain valued employees.

“I can’t say thank you enough for everything you do,” declared Weakley County Schools Transportation Director Ron Byington as he addressed a small gathering representing the 38 total drivers transporting Weakley County students. “You wanted to be there for your kids. If it weren’t for you coming in every day like you do, we would have been in a much worse situation.”

He commended the commitment to rearrange schedules and adjust personal obligations so that when illness took drivers out, all routes could still be covered.

The group included veterans such as Norma Redden who has traveled the roads of Weakley for 38 years for the school system and Shane Lowrance who joined the group two weeks ago. Gene Gardner pointed to Denise Hayes who had ridden his bus 46 years ago and has now been driving her own route for almost 20 years.

Byington, who has held his leadership position for six years, also told the group the future of bus riding includes computerization so that the bus driver’s to-do list will be shortened slightly as students use coded cards and scanners upon entering the bus.

He encouraged the drivers to share ideas for retention and reminded them of the upcoming day of recognition.

“All of you who have been here all this time and done so much for us, we’ve got to let you know how special you are to what we do,” he said.

Helping potential drivers see the benefits of a part-time position that only requires a maximum of three hours each day while still receiving retirement benefits and sick days, earning bonuses and longevity pay, and obtaining the training and testing for a Commercial Driver’s License (CDL) at no cost other than the Department of Motor Vehicles written test are among the recruitment messages school administration are promoting.

Federal law now requires anyone who wants to obtain a commercial license to complete an entry level driver training course. Byington received certification for training bus drivers the first week of February. While driving veterans will be grandfathered, new drivers will need to attend 60 hours of training on Class B vehicles with passenger and school bus endorsements before they take their own route. Weakley County is one of the only school systems in Northwest Tennessee offering third party CDL testing, providing that service for neighboring districts, and is among the first to be certified for training.

Currently bus drivers are paid based on the number of campuses they serve. If transporting to one campus the pay is $71 per day, two campuses $74, and three campuses $76. Field trips earn additional pay. To address retention, Byington hopes to add adjusting pay to reflect tenure and creating some 30-hour positions that would include health insurance.

“In light of the critical function these drivers, mechanics and support staff fill, we are extremely grateful that Ron Byington and our Weakley County Transportation Department continue to take care of our students each day,” Randy Frazier, Director of Weakley County Schools. “While we certainly want to recognize them on a national day of appreciation, we also want to make every effort possible to create the kind of work environment that will attract more drivers and help us keep the great staff we have.”