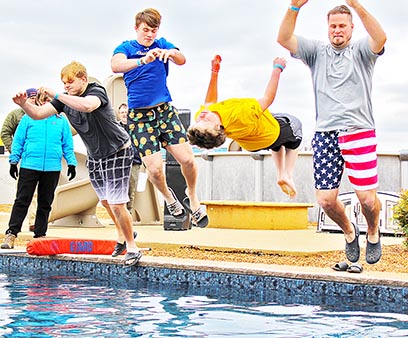 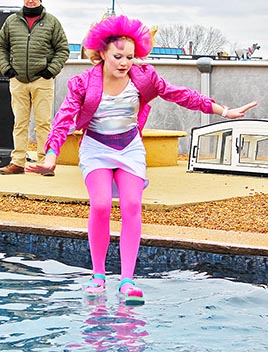 “Arctic” Annabelle Lovell of Greenfield once again took the plunge and was freezin’ for a reason over the weekend as she participated in the annual Polar Plunge event to help raise money for Special Olympians across Northwest Tennessee. Lovell dressed up as a Barbie doll for this year’s event. Photo courtesy of Clinton Smith Photography

UNION CITY (February 12) – The 2022 Polar Plunge for the Special Olympics was held this past weekend at its annual host site, Aloha Pools and Spas in Union City. It was a frigid day, with the water temperature being a shade cold, but it did not stop the intrepid divers from taking the plunge. Seventy-five plungers registered online as well as onsite for the event.

“We are so very grateful to have the support of our community each year as we raise funds for our Special Olympics program here in Upper West Tennessee,” Clinton Smith, Area Director Upper West Region for the Special Olympics Tennessee, stated. “Our friends always show up and show out by helping us reach our goal the past several years. We are appreciative of Aloha Pools and Spas as well as Thunderbolt Broadcasting for being our major sponsors for this event. We also want to thank Higher Ground Coffee and Hops & Barley in Union City as well as Cary Insurance, Blue Cross/Blue Shield, Styles on Broadway, Buff City Soap, Sammies, the Grind Mac & Cheese Bar, Claire & Shuster, CoCo’s of Martin, UTM Athletics, and the Northwest Tennessee Photography Club.”

$20,000 was raised for the event – the top fundraisers for team were The Crusaders of Obion County, raising $2,034. “Arctic” Annabelle Lovell of Greenfield in Weakley County was the top individual fundraiser, pulling in $3,578. Lovell is an annual contributor to the event, having sold specialty soap in the past prior to the event to raise additional money. The costume winner was Willy Wonka and the Oompa Loompas by The Candy Crusaders of Obion.

With these donations, Special Olympic athletes in the West TN region will be able to compete in regional and statewide events, bringing pride and joy to the area. More than 350 special Olympians hail from West TN, and they will continue to compete among the best in the USA thanks to the continuing contributions of the region.