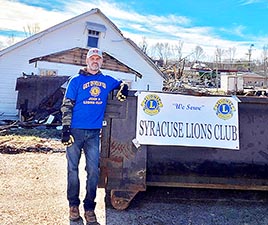 Randy Taylor now lives in Utah but his ties to Dresden compelled him to make the 22-hour drive and deliver nearly $15,000 in collected supplies and cash for victims of the December tornado.

DRESDEN (February 15) – When Randy Taylor heard about the tornado that devastated his hometown of Dresden in December, he wanted to immediately do something to help. While the holidays, a snowstorm and an ice storm may have delayed him, the 1989 graduate of Dresden High School finally made the 22-hour drive from Utah to his alma mater in January with nearly $15,000 of donations.

After first ensuring that his father, Gary Taylor, in Dresden and Grandmother Polly Taylor in Greenfield were unharmed, he began his quest to make a difference. Family commitments for the holidays in Utah meant he had time to spread the word to groups like area Lions Clubs and his son’s soccer team. He gathered and sent boxes of clothes to friend and DHS teacher Stacey Lockhart who made sure they made it to Dresden Elementary.

Taylor’s wife, Heather, an oncology nurse, even shared the need with patients which resulted in one family, the Cowdins from Syracuse, donating the entire cost of the U-Haul rental that was required after Taylor’s Ford F150 reached capacity.

With lots to give, Taylor now needed to get on the road. Retired Air Force and now the Business Development Manager for Military Global Support, he is accustomed to the demands of travel. But even he calls the journey “quite the adventure” as he attempted first to leave on a Wednesday but only made it to Wyoming before snow drifts halted him. After a four-hour wait at a truck stop in hopes that the closed interstate would reopen, he returned home. Thursday, he had a repeat of the day before. On Friday, the weather was cooperative in the west, but the same storm had moved east and was causing ice in Dresden. Saturday, though he still had to wait it out at that same truck stop for a couple of hours due to more road closures, he and a parking lot full of other vehicles finally were able to start their engines.

“It was the Indy 500 as cars started taking off,” he reported. His determination kept him behind the wheel the entire trip, except for a few hours when he pulled off to get a little rest.

Upon arriving in Dresden, he checked on his father, and then started spreading some much-needed cheer. He met up with fellow DHS classmate and now Principal Scott Killebrew and learned of student needs. He went by the donation/distribution center set up in Dresden and asked what was lacking there. Then he went shopping. When he was finally making deliveries, he was able to increase the gift card distribution by two, get two much-needed TI 84 calculators for DHS students who were wiped out, deliver dog and cat food to the local vet, and stock several empty shelves.

The trip gave him the opportunity to see the school he hadn’t seen since graduation and visit with friends such as Lockhart, Killebrew, Dresden Middle School Principal David Lewellen, ESSER Director Angie Rushing, and Sharon teacher Kristi Parsley.

“Touring the school brought back a lot of memories,” he noted. “My work schedule is crazy, and I travel a ton, but I told my wife that I need to make it more of a priority to get back more.”

Principal Killebrew said he was excited to see Taylor after not seeing him since graduation. “I’m very impressed that he has been so successful yet would take the time to give back to his community, and then add in that he came representing a community and clubs who were truly selfless to give to people they don’t even know. I’m truly appreciative for what the students received and the example the people in Utah set.”

Taylor, too, expressed appreciation for all his Utah friends and family who made the significant contribution possible and added, “I did what felt right in my heart. Dresden is my home and will always be my home, so I had to do something to help.”

Taylor’s was among several long distant donations received by Dresden schools. A school in Wisconsin sent “thinking of you cards” and donations of new socks to Dresden Elementary after making the connection via Dresden native Sherry Brock. Project Restoring Education After Disasters (READ), launched after a principal lost his school to California fires, donated book bags with school supplies to all three schools. The California principal and a firefighter friend, who are both married to teachers, drove the supplies to Kentucky and several damaged sites in Tennessee. Brad Deming Memorial Bicycle Fund based out of Bolivar gifted more than 30 bicycles. Dresden Middle School was the recipient of a pallet of water from the overflow of donations made to victims in Mayfield, Kentucky.

In a recent meeting of the local emergency planning committee where school administration was in attendance, county leadership reported 187 homes were affected by the tornado with 121 of those destroyed.

“Disasters often reveal how tight a community can be and how even distance can’t separate us from those we care about,” said Randy Frazier, director of Weakley County Schools of the numerous local and far-ranging donations. “We are grateful for each church, organization, family and individual who have taken the time to give money, volunteer hours, food and more to help our students.”