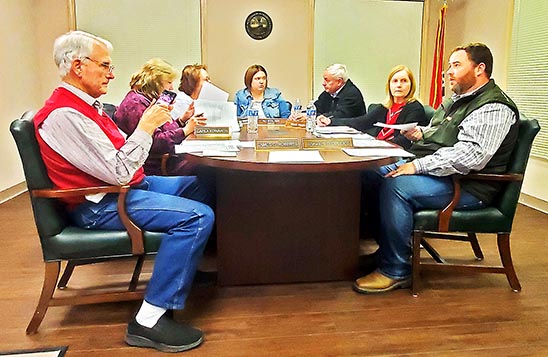 The Sharon Board of Mayor and Aldermen met last week to discuss water meter projects, budgets and usual business during its monthly meeting.

The Sharon Board of Mayor and Aldermen met for its January meeting. November minutes were quickly approved, and in light of the absence of a December meeting, the Board took the time to thank Smith Farms for helping the City of Sharon feed 317 citizens during Thanksgiving. Also noted was the Christmas Open House being a successful event, with 18 total gifts being handed out. “It was really good to see the community take part in it,” said Mayor Ali Stalter.

On the matter of old business, the water meter upgrade has been suspended due to regulations. It has not been finalized how the money can be spent, and until clarity has been given, the project will be in stasis. The employee handbook update, revised by City Recorder Becky Hames, was passed unanimously and took effect the evening of the Board meeting. A discussion was held regarding necessary sidewalk repairs, with the board coming to the agreement of using florescent paint as a temporary solution until a sidewalk repair grant can be applied for with the state. A decorative light poll struck by a Sidonia citizen has had a replacement ordered. Finally, due to recommendations from liability insurance adjustors, the city seeks to replace their stop signs.

On the matter of new business, bids are being taken for roof damage in the municipality. Becky Hames, on record to The Enterprise, touched on further storm-related damage by informing the public two homes were destroyed in the area, but both were outside the city limits. One was abandoned, and no individuals were hurt. Additionally, the City of Sharon is receiving an influx of displaced Dresden citizens making inquiries about Sharon residency openings.

A protracted argument took place between Mayor Stalter and Alderman James Gary Roberts regarding the budget layout. Mayor Stalter’s reply to Robert’s initial line of questioning was that it is the same sheet given to the Board every month that is prepared by Hames. Roberts contended the budget layout does not provide annual expectations or profit margins. He used, as an example, the fact anticipated water sales budget over the entire fiscal year does not show up. Pointing out the board sets the budget, as a board function, the board should be able to track every aspect of the budget. He demurred however when pressed by Mayor Stalter, stating, “I do not question what you are doing.” Both sides murkily acknowledged the other may have a point, leaving no distinct clarity on the matter. Roberts did appear to be alone in voicing this concern.

Greg Evans, head of Public Works, next gave his report. The City of Sharon is operating at 83 percent water levels, 3 percent higher than the mandated 80 percent across Weakley County. Evans brought up the need for new water valves, something that was echoed by Gary Eddings of the Volunteer Fire Department. Roberts contested the 20-year-old valves are still fairly new, though it has been noted by both Evans and Eddings the valves are stuck and not opening. Evans and his team were thanked by the Board for their work regarding the water leak that occurred over Christmas. During Citizen Input, Evans had questions raised to him about yard pickups, which he replied with some frustration is a byproduct of his small team, further limited by illnesses.

Eddings of the Volunteer Fire Department spoke next. He also touched upon the issue of the valves in depth, speaking about plans to be drawn over the next five years of how to address the issue. Of note, he also stated the department is shifting to a digital radio system.

Next was John Andrews of the Police Department. Of note to the community is a toy donation drive, which was run by the prior police chief; donations were taken at the Sharon Dollar General. Four or five families had toys donated to them.

For the Condemnation Board, letters were sent to the two people who will be meeting in court to discuss their two properties. The Mayor withheld the names of the property owners as a matter of discretion.