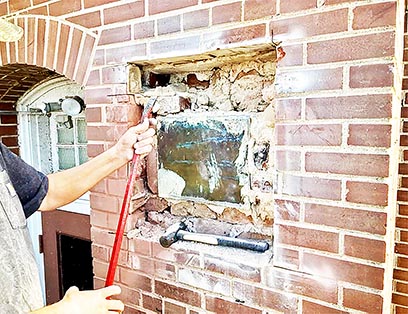 A copper, cornerstone box was recovered from the historic Dresden First United Methodist Church during the recent demolition of the church after it was hit by a tornado December 10, 2021. Church members are working with Discovery Park of America to open and conserve the contents of the box. Photo courtesy of Brody Kemp

UNION CITY (January 12) — Church leaders from Dresden First United Methodist Church in Dresden, are working with artifact experts from Discovery Park of America, a museum and heritage park in nearby Union City, to open and conserve contents of a copper cornerstone box that was discovered during demolition of the church building.

The building was damaged beyond repair December 10, 2021, during one of the worst outbreaks of tornadoes ever recorded in the United States. The cornerstone box was found bricked inside a part of the church that was dedicated in 1923 and was previously unknown to many of today’s church members. Once discovered, demolition halted as those on hand began work to carefully extract the box from the cornerstone of the building.

Wayne McCreight, a church trustee, contacted Discovery Park to ask for help safely extracting the contents of the box.

Jennifer Wildes, the museum’s senior director of collections and exhibits, will manage opening the box in the next few weeks and will be prepared to conserve what, if anything, remains inside after being hidden away nearly 100 years. Photos of any items found will be posted on Discovery Park’s Facebook page and loaned by the church for display at Discovery Park for a short time.

“If we find artifacts that are damp and fragile, it will require delicate care to preserve them intact before they can be thoroughly examined and cataloged,” said Wildes. “Whatever we find, we’ll make certain these items left by church members from the past are preserved as a reminder of the church’s important history.”

Dresden, the county seat of Weakley County, was organized in 1825 and incorporated in 1827. When the town was laid out and lots made available for purchase, land was designated for a house of worship. That lot was purchased on February 4, 1833, and it was there the church was located in various buildings until the tornadoes of 2021.

Church leaders are in the process of planning where and when their new church building will be built. Contributions to the Dresden First United Methodist Church rebuilding effort may be made online at GoFundMe.com by searching “Dresden FUMC Rebuilding Effort,” or checks may be mailed to: Bldg & Renovation Fund, Dresden First United Methodist Church, 411 Morrow St., Dresden, TN 38225.