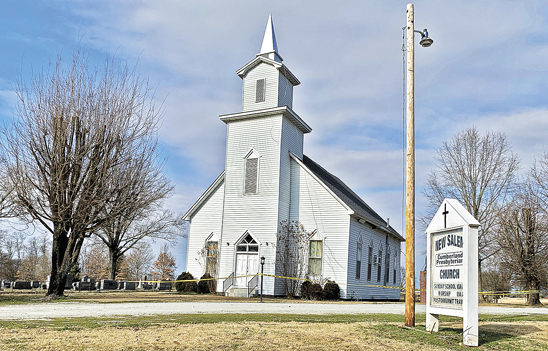 DRESDEN (December 27) – For more than a century, the picturesque, rural church on Highway 89 between Dresden and Sharon has served as the site for weddings, reunions, celebrations and worship services for people in the New Salem community and beyond. After 128 years of standing tall ahead of its scenic backdrop of rolling fields, this year will mark the end of an era as community members bid farewell to the building housing the New Salem Cumberland Presbyterian Church. The legacy of the building comes to an end after the December 10, 2021, tornado made its way down Highway 89 between Sharon and Dresden before tearing up parts of the Dresden downtown area.

“The church, which was damaged in the tornado but still standing, is not structurally safe, and will have to be demolished. We will rebuild in the same place, but what kind of structure has not been decided. There was so much damage in our New Salem community, and two homes completely destroyed, sending a former hospice chaplain to the Memphis hospital, plus so much destruction of property along Highway 89 from the crossroads of Highway 22 and 89, on both sides of the highway on past the church, located on the corner of Highway 89 and Rambo Road,” church member Pat Travis shared.

Transcribed and Submitted by Judy Johnson

The church was organized in 1849. The building standing today was built in 1893 and is one of the oldest landmarks in Weakley County.

The church first came into being from a campground meeting. The meetings were held in crude brush arbors and were called the Jones’ Camp Meeting Grounds after Israel Jones.

The meetings would sometimes last for weeks. This form of worship continued until 1849. William C. Jones gave the land for the church in 1850. The carpenters who built the first structure boarded with Mr. and Mrs. Charley Kilgore; Joe Miller and Bill Mangrum did the painting.

The church continued to grow and on March 11, 1983, the church Session met for the purpose of making plans to build a new building. Hilary Jones, R.S. Roberts, Norman Mitchell, Lizzie Wash and Betty Roberts were named to a committee. The present structure as you see it today is the result of their planning.

The committee reported $1,000 on hand at the beginning of the building program, including $100 received from Jim Wash from the sale of the old building. They were instructed by the Session to allow only first-class materials to be used throughout the structure.

Nothing but the best can be found in this building from the ground to the cupola. Hilary Jones, son of William C. Jones, was the architect. The building was completed on November 4, 1893, at the cost of $1,800. A dedication service was held by Rev. H.R. Reed.

The first Sunday school was mentioned in the minutes from January 4, 1896. Mr. Jim Thompson is credited with being one of the first in the organization of the Sunday school. He served as superintendent for several years. Others who served in the Sunday school during this time were Alice Roberts, Mrs. Dump Nooner and Irene Stoker.

In June of 1900, a committee composed of J. A. Harkey and Lizzie Wash, was appointed to serve as a working connection between the church and Bethel College.

The first mention of Children’s Day program was in June of 1901.

Around the turn of the century, some of the church leaders mentioned in the minutes were Foster Brooks, O.T. Brown, Junior Stoker, Jim Hilliard, Wes Wash, Charlie Thompson and Len Chandler.

During the history of the church, the elder with the longest term of service was J. A. Nooner, serving as clerk of the session for many years. He served as a church officer for 53 years from 1874 until 1927. He also carved the pulpit used in the church since it was built.

Some of the great ministers throughout the history of the church were Revs. Allen Foust, O.E. Gardner, W.H. McClesky and R.H. Jackson

The first organist was Irene Stoker.

The church held its centennial in 1949. Many people were present for this all-day occasion.

The New Salem Cemetery, adjoining the church, is also a landmark. It has been used as a burying ground for the community since 1885. John Camp Chandler was the first person buried there on December 7, 1885. Many of the church pioneers are buried there.

Markers for others, including Israel Jones, dating back to 1800, have been moved to this place.

The church’s session appointed certain ladies of the church to collect money for the upkeep. Onie Wash, Guyrene Wash, Clara Chandler, and Fannie Somers served in this capacity for many years.

The cemetery now has an endowment for perpetual care, which was initiated in 1950 by Mr. and Mrs. Carman Speight, lifetime residents of the community from pioneer families. Ruth Speight’s ancestors, George Somers and Andrew Jackson Somers, were among the early leaders of the church. The endowment is now managed by their daughter, Frances Speight Clark, and grandson John Carman Clark.

Through the years, many young students from Bethel College have been trained in the New Salem Church. The late Rev. Howard Hayworth served the church as pastor from 1977 until his death in 1985.  Russell Chandler, grandson of J.C. Chandler, one of the pioneer elders, served the church as deacon, elder and session clerk from 1935 until his death in 1987.

The elders in 1989 were Guin Chandler and John Carman Clark. Guin was the superintendent of the Sunday school and also served as teacher and officer for more than 60 years.

The present minister is Rev. Kermit Travis, whose ancestors were pioneer settlers in the community.

Mr. and Mrs. Frank Pierpoint have been regular members for more than 40 years. They took pride in the care of the church grounds and cemetery.

On October 28, 1989, the Isaac Dawson Chapter of the Tennessee Society, Daughters of the American Colonists, presented a historical plaque to the New Salem Cumberland Presbyterian Church. Mrs. Thomas C. Holmes, Jr., of Flowery Branch, Georgia, National Chairman Historical Landmarks and Memorials Committee, NSDAC made the presentation of the marker. Guin A. Chandler, great-great-grandson of J.C. Chandler, an elder in 1874, gave the acceptance of the marker.