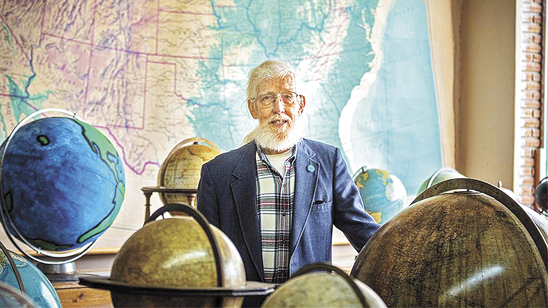 Explore the magical world of Murray Hudson in this never-before-seen temporary exhibit. This extraordinary experience will shine a spotlight on one of the most unique collections of globes and maps in the world. “The Fascinating World of Murray Hudson’s Globes and Maps” are on display now through March 1. It is sponsored by Conley and Conley Attorneys at Law.

UNION CITY (December 27) — Thanks to a partnership with Magnolia Place Assisted Living, children 17 and younger receive free admission to Discovery Park of America this month.

Magnolia Place’s support is made in memory of Bart White who was a long-time board member and board president of Magnolia Place. “Bart White was a true servant of our community and a good friend to us all,” said Cindy Cox, administrator of Magnolia Place. “This year, we see this as a way we can honor Bart while helping even more young people have an opportunity to visit Discovery Park.”

This year, there are many opportunities for moments of discovery for children at Discovery Park including the temporary exhibit, “The Fascinating World of Murray Hudson’s Globes and Maps.” The exhibit shines a spotlight on one of the most unique collections of globes and maps in the world.

Hudson is a former English professor, stockbroker and farmer from Dyersburg, Tennessee, who owns the largest private collection of for-sale antiquarian maps, globes, books and prints in the world. On display are early maps from the 16th century to the present, items of historic relevance and incredible globes that could pass for works of art. Those exploring the exhibit will also get to see rare globes that range from a two-and-a-half-foot wide diplomat’s globe from 1918 that focuses on political geography to one of the smaller curiosities in his collection, an 1840s boxed globe from Germany that shows Texas as an independent republic, just before it was annexed by the United States. “The Fascinating World of Murray Hudson’s Globes and Maps” is open through March 1, 2022.

A complete calendar of events can be found at discoveryparkofamerica.com.

The mission of Discovery Park of America, a premier world-class museum and 50-acre heritage park located at 830 Everett Blvd., in Union City, Tennessee, is to inspire children and adults to see beyond. Included is a 100,000-square-foot museum featuring 9 interactive exhibit galleries with additional space for temporary exhibits from around the world and a 50-acre heritage park. Discovery Park of America is a 501(c)(3) public charity funded by generous individuals, corporations and foundations including its principal funder, the Robert E. and Jenny D. Kirkland Foundation. For more information, visit DiscoveryParkofAmerica.com, Facebook, Instagram and Twitter.