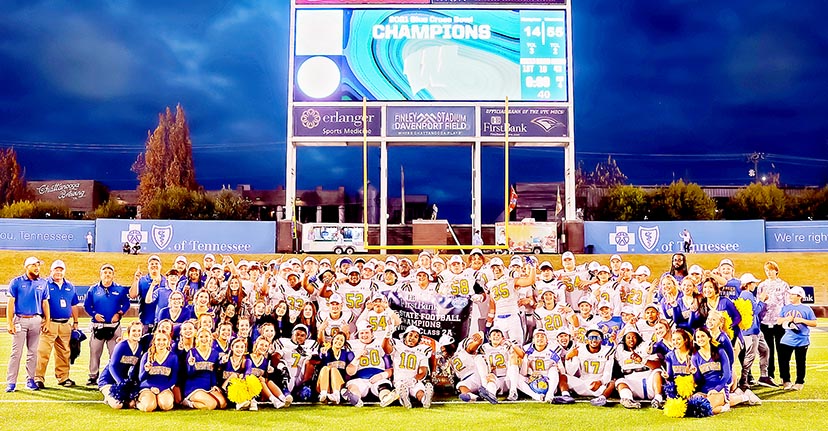 STATE CHAMPIONS – For the first time in the school’s history, the Westview High School Charger football team has claimed the Tennessee Secondary School Athletic Association (TSSAA) state championship title. Westview dominated throughout its season in Division 1, Class 2A, coming into Saturday’s game in Chattanooga with 13 consecutive wins. The team faced Hampton High School of east Tennessee, the Bulldogs’ first-ever appearance in a state championship game. The Westview Chargers clinched a playoff spot in the big dance 20 years ago, where they walked away with the runners-up plaque. This year, the team “broke down the door” and brought home the golden football trophy, ending its season with a record of 14-1. Photo courtesy of Christel Laney

CHATTANOOGA (December 4) – During a pre-season interview with second-year Westview High School Charger football team head coach Jarod Neal in early August, he said his goal was to get the team to the championship game at the end of the season. Neal and the seasoned team accomplished that goal, and then some, bringing home the gold ball trophy after a trip to Chattanooga Saturday, December 4.

This was Neal’s second year leading the Chargers. His first season, the team was in Region 3A. This season, the Chargers were bumped by the Tennessee Secondary School Athletic Association (TSSAA) to Region 2A, pitting them against teams such as Trenton Peabody, Camden and Union City.

After taking on the regional games throughout the season, the Chargers picked up momentum, earned playoff spots and that momentum didn’t stop. They faced off against the Hampton High School Bulldogs from east Tennessee in the Class 2A TSSAA BlueCross Bowl State Championship and brought home the win. This was Hampton’s first-ever state championship appearance. The Bulldogs went into the game with a 13-3 season.

The Chargers, led by senior quarterback Ty Simpson, Tennessee Titans Mr. Football winner, All-American Bowl player and University of Alabama commit, went into Saturday’s game with a 14-1 record. The team had 12 consecutive wins going into Saturday’s championship game. This would be the team’s second shot at the title; the first 20 years ago in 2001.

During coach interviews Tuesday, Neal said he knew the reality of opposing teams holding the ball, burning time off of the clock for the Chargers’ possession. The team is known to put points on the board with each possession, while the defense shuts out its opponents.

The beginning of Saturday’s championship game at Finley Stadium in Chattanooga saw Hampton holding the ball for much of the first quarter. The Bulldogs used a little more than 9 minutes to get the ball 61 yards down the field. The first points on the board were 6 earned by Hampton High School senior quarterback Conor Jones. Trying to get the upper hand, the team was successful at adding 2 more points in a 2-point conversion, instead of opting for the extra point kick.

In Westview’s first possession of the ball late in the first quarter, the Bulldogs picked up a pass interference penalty on Westview’s first play. The second Charger play saw Simpson connect on a 45-yard pass to Quincy Hamilton for the team’s first 6 points. The team was unsuccessful at getting a 2-point conversion, but that would be the only time Westview didn’t earn the extra points after a touchdown. Within 18 seconds of possession, the Chargers managed to put points on the board.

With 2:10 remaining in the first quarter, an onside kick by senior kicker Jackson Abel resulted in a fumble by Hampton with Charger tackle Quindarian Johnson recovering, giving Westview the ball for a second time in the first quarter. This was the 40th forced turnover of the season by the Westview Chargers. Once again, the Westview possession resulted in another quick score as Simpson lobbed a 34-yard pass to wide receiver Garner Anderson, picking up 6 more points and taking the lead 12-8 with 1:48 left in the first. Looking to widen the gap and get another 2 points on the board, Westview’s Hamilton was successful in scoring on the 2-point conversion, bringing the score to 14-8.

Abel took the field for another onside kick and Hampton’s first play during it’s second possession resulted in a false start penalty. Westview’s defense was there to hold the Bulldogs and showed it when on its second snap, Charger Johnson caught Jones behind the line of scrimmage, bringing him down for a loss of yards. Hampton kept possession of the ball going into the second quarter.

That possession resulted in Hampton once again putting points on the board first in a quarter when Jones connected on an 8-yard touchdown pass, tying the game at 14-14 with 10:53 left in the second. Hampton was looking for another 2 points, but was denied by WV’s Johnson. This was the last time Hampton would put points on the board at the state championship game.

When the Chargers took possession of the ball, the team made quick work putting points on the board when Simpson took off for a 55-yard run, stopping on the 1-yard line. An illegal substitution for defense penalty on Hampton placed the ball half the distance to the goal line and Westview’s offensive line forced a hole for Simpson to walk the ball into the end zone for a touchdown. This was Simpson’s 13th rushing TD of his season. The 71st point-after kick in Abel’s career was good, bringing the score to 21-14 with 8:48 left in the 2nd quarter.

Hampton’s next possession saw Westview’s defense showing its spirit as it has throughout the season, looking for a win and to shut out its opponent. After 3 quick plays, Hampton was looking to go for the first down on a 4th with 4 yards left. The Bulldogs were halted when Charger safety Omarion Harris knocked down a pass, giving his team the ball on its own 40-yard line. Westview possessed the ball for 46 seconds and managed to rush wide receiver Javion Goins 19 yards into the endzone, making the score 27-14. Abel’s extra point kick was another good one, as Westview widened the gap even more at 28-14, with 4:23 left in the 2nd quarter. The final minutes of the quarter saw back and forth penalties and Westview’s defense shutting out the opponent. Hampton’s Jones suffered another loss of yards when senior linebacker Ashton Carter tackled the quarterback. Carter is the son of Aaron Carter, who played offense as a senior during Westview’s last state championship game in 2001. Westview were state champion runners-up 20 years ago.

A pass interference penalty against Westview’s Drew Shanklin might have been a game changer with 1:19 left in the first half, giving Hampton a first down. With seconds left in the second quarter, Shanklin redeemed himself when he forced a Bulldog turnover on the goal line, giving Westview the ball again. Prior to that, Carter forced a Hampton incomplete pass in the end zone.

With only seconds remaining the second quarter, Simpson launched a pass that was intercepted by Hampton, but the Chargers would return from halftime possessing the ball. With more than 10 minutes remaining in the 3rd quarter, Simpson tossed another pass that was picked off by Hampton on the 10-yard line. During its possession, Hampton caught a holding penalty, making it 2nd and 19. Westview’s Anderson picked off the pass by Jones, lining up his team for a 1st and goal on the 10-yard line. This was Anderson’s 7th interception of the season. Simpson’s offensive line set him up again to walk the ball into the end zone for another Charger touchdown. Abel’s point-after kick was good, bringing the score to 35-14.

Hampton’s next possession resulted in another interception, this time by Westview’s Goins, who took advantage and ran the 29 yards to the end zone. He was assisted in that turnover by Anderson. With 6:10 left in the 3rd quarter, Abel put another point on the board, Westview leading by a score of 42-14.

Hampton held onto the ball for much of the remainder of the 3rd quarter, but the Bulldogs were forced to give the ball back to the Chargers after an unsuccessful attempt at a 1st down from 4th and 2, with 54 seconds left.

The Chargers’ possession going into the fourth saw Hamilton sprinting more than 50 yards into the end zone, but the play was denied after a holding penalty against Goins. Simpson followed Hamilton’s lead and sprinted 51 yards toward the end zone before he was stopped on the 5-yard line. Goins was up next and brought down at the 2-yard line. Westview’s offensive line was consistent and allowed an opening for Charger running back Dearca Nicholson to walk into the end zone and score a touchdown for his team. Not wanting to give the Chargers any more points of the game, Hampton’s Jones blocked the extra point attempt, bringing the score to 48-14 with 9:04 left in the game. Hampton’s Jones played dual roles in Saturday’s game at quarterback and on defense.

Hampton’s momentum deteriorated as each possession in the 4th quarter ended up without points and giving the ball back to Westview, which managed to put points on the board one more time before the end of Saturday’s game. With 4:48 remaining in the game, Simpson lobbed a 1-yard pass on a 3rd and Goal to wide receiver Cade Spaulding, who gave the team another 6 points. Abel’s extra point was good, making the final score of Saturday’s TSSAA Class 2A BlueCross Bowl 55-14. This was the 13th consecutive win for the Westview Chargers, finishing their season with an impressive 15-1 record.

Following the game, Simpson was named the TSSAA BlueCross Bowl Most Valuable Player (MVP). Winning the state championship for the first time in Charger history was cause enough to celebrate, but Westview Assistant Coach Zack Jones added to the excitement of the post-game on the field. Jones dropped to one knee and proposed to girlfriend, Rachel Powers, on the field. She said yes. A video of the proposal, along with more than 400 game day photos can be found on the Dresden Enterprise Facebook page.