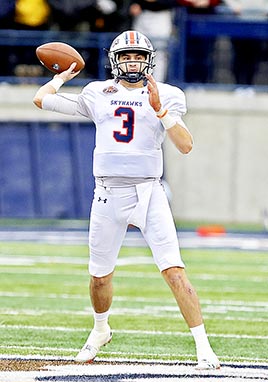 BOZEMAN, MONTANA (December 4) – The historical 2021 University of Tennessee at Martin football season ended Saturday with a 26-7 setback at No. 8 Montana State in the second round of the NCAA Football Championship Subdivision playoffs. The Ohio Valley Conference champion Skyhawks conclude the fall with a 10-3 overall record – their most victories in the school’s Division I Era (since 1992).

It was a defensive battle that afternoon as the game was scoreless through 17-plus minutes. UT Martin trailed by only three points at halftime and was within six points going into the fourth quarter before the Bobcats pieced together 13 unanswered points in the final 14:05.

John Ford and Jay Woods joined forces for the Skyhawks’ lone touchdown of the day – the fifth defensive score of the season for UT Martin (four touchdowns, one safety). Ford jarred the ball loose for a fumble and Woods scooped it up and sprinted 68 yards untouched down the visitor’s sideline for a touchdown with 16 seconds remaining in the second quarter.

Kicking into winds that exceeded 30 miles per hour throughout the day, Tyler Larco boomed seven punts for 279 yards (39.9-yard average) – including a long of 58 yards. He pinned Montana State inside its own 20-yard line on three different occasions.

“I’m proud of our kids,” Skyhawk head coach Jason Simpson said. “It was 10-7 at halftime and we’re hanging in there and fighting. We just didn’t do a very good job of moving the football. That’s a good defense – they’re coached well and have a good scheme. They didn’t give up any big plays to us today – we couldn’t hold the ball long enough to find one of those seams in the zone. Montana State has a good football team and we wish them the best.”

Both sides combined for just 109 total yards in the opening quarter. UT Martin’s defense held the Bobcats to five plays on their first drive of the game, forcing an incomplete pass on 4th-and-4 from the Skyhawk 36-yard line.

Time of possession was heavily valued in the third quarter as Montana State had just two drives and UT Martin only managed one full drive. The Bobcats successfully made a 30-yard field goal attempt on the initial possession of the quarter. Both sides then swapped punts and the Skyhawks only ran two plays before heading into the fourth quarter facing a 13-7 hole.

UT Martin moved the ball 36 yards on its ensuing possession but could not convert a 4th-and-7 opportunity from the Montana State 38-yard line. The Bobcats answered with an 11-play, 62-yard drive that milked 5:31 off the clock, ending with a 17-yard touchdown run.

The Skyhawks’ 2021 season was a memorable one as UT Martin became just the third team in school history to win 10 or more games, joining the 1967 and 1988 squads. En route to their second OVC championship in program history, the Skyhawks were ranked as high as eighth nationally – equaling their highest rank in school history. Simpson earned OVC Coach of the Year accolades and won his 100th career game to move into fourth place all-time in league history, presiding over 21 All-OVC honorees.