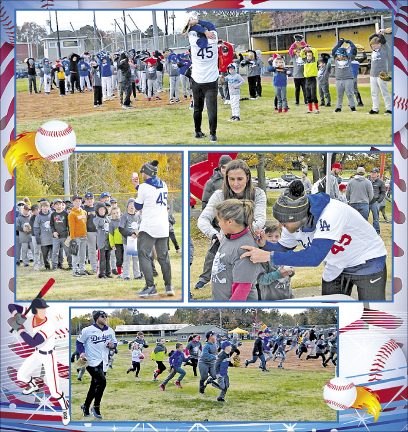 L.A. Dodger and Dresden native Matt Beaty along with wife Jesica, hosted their annual Matt Beaty Scholarship events on November 13 and 14. Saturday was the golf tournament in Persimmon Hills Golf Course and Sunday was the baseball camp held at Wilson Park in Dresden. Photo by Jasmine Williams/Dresden Enterprise

DRESDEN (November 13-14) – Dresden product Matt Beaty has had his share of good fortune in his young life.

Beaty parlayed a successful high school career with the Dresden High School Lions into an opportunity to play baseball for Belmont College. From there, he was picked in the 12th round of the 2015 Major League Baseball amateur draft.

He can now say he is a World Series champion, along with legends like Babe Ruth, Joe DiMaggio, Bob Gibson, Lou Brock, Derek Jeter, Hank Aaron, Greg Maddox and Reggie Jackson. Most folks have a better chance at winning the lottery than hoisting that gold trophy. Beaty is a first baseman-outfielder for the Dodgers.

Now, Beaty and his wife Jesica are giving back to the community that served as the launching pad for his career. On November 13 and 14, the Beatys hosted a golf tournament and baseball camp for the youth in the area. The event served to raise money for the Matt Beaty Scholarship Fund.

While there are a few details to hammer out with the scholarship fund, mostly bureaucratic, that doesn’t mean the funds raised from this event and the one in 2019 hasn’t benefitted local sports programs.

And the support has been well received.

“We bought jerseys for Dresden High School baseball, a blocking sled for Greenfield High School football,” said Jesica. “Sharon’s cheerleaders said they needed some tumbling mats, so we were able to get that for them. Westview wanted to play in a seven-on-seven football tournament, so we sent them a check to help with that. We also got Sharon some new basketballs. We’ve sent out a lot of checks across the county.”

Part of what makes the Beatys’ largesse possible is the silent auction they held during the golf tournament. It raised $3,265, double from the year before. The Beatys held the golf tournament at the Persimmon Hills Golf Club in Sharon and offered a youth baseball camp at Dresden’s Wilson Park, which drew 120 budding ballplayers.

“We want to give back 100 percent,” Jesica said. “We wanted the kids to see Matt standing on the field where he played and the same field these kids play on,” she said. “We want them to see that if they have a dream and can work hard, they can make it, too. We don’t live here anymore, but we do want to be a resource for the community.”

Matt said he really enjoyed seeing the kids on the field.

“I was really nervous about it at first because I heard there were going to be about 100 kids out there,” he said. “Once I saw their smiling faces, it was really cool. It was cold, but it was great to work with them on the game of baseball and bring the community together.”

Playing on a team that won the World Series may have brightened Beaty’s magnitude in the eyes of the young players, but he said he savors that role.

“I wore my ring during the golf tournament and the baseball camp. It wasn’t just the kids, but some of the grown men were in awe,” Matt said. “Some of the kids brought their travel ball rings to show me. It was really cool to see the smiles and joy.”

Beaty got the call to the Bigs on April 30, 2019, and he said the experience was hard to put into words.

“I was in Oklahoma City and thought I had a chance, since I was put on the 40-man roster,” he said. “A.J. Pollock (Dodger outfielder) hurt his elbow, which created a roster spot. I was laying in bed and got the email from the Dodgers’ travel secretary that I had gotten called up. I was so thrilled. Then I started getting calls and text messages from friends. It was special. The support was overwhelming.”

Then the Dodgers won the World Series in 2020.

“That was incredible. It was one of those emotions you can’t explain unless you’re there,” Beaty said. “After the strike-three call, we sprinted out there on the field and celebrated. That’s where you want to be. You want to be the last team standing, holding that trophy.”

Despite the COVID restrictions, Beaty said he was glad to share the moment with family members who were able to be at the ballpark in Arlington, Texas, site of the Series because of COVID.

“I could see my parents and brother,” he said. “That was a pretty cool experience.”

And that experience has enabled him to give back. Several of his teammates, like Clayton Kershaw and others have their charitable foundations and have helped Beaty in his efforts. Kershaw, Justin Turner, Freddie Freeman offered signed memorabilia. Even Dodgers’ owner Magic Johnson offered a signed jersey for auction.

“Kershaw gave us a ball, J.T. gave a bat,” said Beaty. “He does a lot for his community’s Little League and does food drives, gives out baskets during the holidays and gives back to his community.”

“When you are doing a scholarship, you have to get your ducks in a row,” Jesica said. “They recommend that you have a committee to select the scholarship recipients. We’re not a 501c3 yet, but we’re operating under an umbrella fund right now, so that works better for us.”

Meanwhile, Beaty won’t forget where he came from.

“Playing baseball is what I wanted to do, but you don’t know what that opportunity is. You think about what it is to go from high school to college, then to getting drafted,” Beaty said. “This year, they said the 20,000th player made it to the Big Leagues. Think about that. That barely half-way fills a stadium. I wanted the kids to see me on the same field they’re playing on, let them enjoy baseball and bring the community together.”