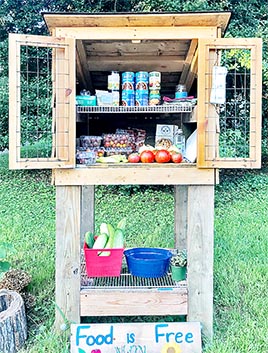 The Food is Free Pantry, located on Oxford Street in Martin, came about after the health pandemic saw people spending less time together and Ashley Kite Rowland wanting to strengthen the community.

MARTIN – Ashley Kite Rowland, proprietor of the Food is Free Pantry on Oxford, possesses a marriage of forwardness and positivity in her manner that is, besides reassuring, rare. The idea for her food pantry germinated while coming across The Food is Free Pantry in Martin, and what began there is a continuing pattern of community participation that contributes a little bit of hope in our difficult times. In Ashley’s own words, “If you have an idea and want to make it happen, share it with others. They just may help you make it happen.”

Ashley’s career in boosting local food draws back to her time co-founding the Northwest Tennessee Local Food Network with Samantha Goyret, “food insecurity is a significant issue in our community.” While the Food Network has a broader goal distributing local producers’ products into the K-12 school system, the food pantry has a more personal mandate. After posting on Facebook about her growing inspiration for a pantry, Dr. Dooley commented on her post explaining he could build what she was wanting. Dr. Dooley, with contributions from local lumber sources, delivered the pantry to her house.

The Food is Free on Oxford Pantry has a focus on garden produce that is uncommon in pantries, although more common foods such as canned goods are also available.

Ashley has a passion about making more readily-available, diversified food resources for middle- to lower-income families. In her envisioned sharing economy, there is great faith placed in people contributing as much as they receive, which could be dismissed as idealistic, but has been to date rewarded. In a touching story relayed by her, her neighbors were growing patio tomatoes; the neighbors’ young children were excited to donate their first grown tomatoes to the pantry. “It’s not about having a lot of money, it’s about everyone willing to share, and when you add all those little extras together, it makes a difference.”

Ashley thinks of it as a community pantry, not her pantry. It began as her idea, but it was the community that donated the wood, that built it, and keeps it stocked. Whether it is people personally offering their home grown produce, or CSA Farm Dixie Chili Ranch donating, or the camaraderie that the local pantries show with each other – Ashley herself has donated produce that could not fit in her pantry to Little Free Pantry Martin (located on Clearwater Street) – everyone has put their little extra in. Indeed, the envisioned sharing economy has brought people together, both in a touching way for the community, and an urgent way, as it offers a variety of necessary goods to people who are struggling.

For, in Ashley’s words, “a place where people can get the nourishment they need without judgement,” visit the Food is Free Pantry on Oxford, located at 206 Oxford St. in Martin.