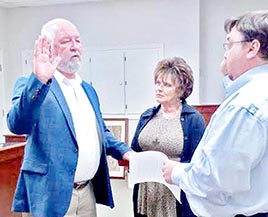 GLEASON (November 2) — During a called meeting of the Gleason City Board held Tuesday, November 2, members voted to install Mike “Coach” Bennett as an alderman to fill the seat vacated by Alderman Danny Browning, who died October 5, 2021, after failing to recover from the COVID-19 virus.

Bennett served as a junior and senior high math teacher and football coach at Gleason School for 38 years before he retired in 2020.

Mike and Sandy Bennett, who have been married for the past 42 years, continue to serve as role models for the younger generation in their community.

“They’re both outstanding citizens, and he was a good fit to serve as our new alderman,” Mayor Charles Anderson said.

When asked about being chosen to serve as a city alderman, Bennett said, “I think it’s an honor.” However, he expressed great sorrow over the loss of the late Danny Browning, who was a personal friend. “I thought the world of Mr. Danny. He was a great man. I just hope I can be half the person on the board that he was.”

Bennett is originally from Hollow Rock and graduated from Bruceton-Hollow Rock High School in 1975.

His sports background at the collegiate level includes playing baseball for two years at Motlow State Community College (located near Lynchburg), and then, transferring to UT Martin, where he played baseball as a junior and senior.

Looking back over his teaching and coaching career, Bennett said, “I enjoyed all of the athletic parts of it. And as a teacher, I hoped that I could make a difference in someone’s life – to help them to be good citizens – to make them want to work hard at whatever they decided to do. I always told them, ‘Money is not everything. You have to be happy at whatever job you choose to do.’ I’ve enjoyed trying to influence young people’s lives in a positive way.”

He noted, “It’s the greatest feeling in the world” to have former students tell him the things he taught them have helped them to become successful in life. And even the small things can sometimes make a big difference. Bennett recalled a former student telling him, during a job interview, he was asked if he came to school on time. Once the student got past that hurdle, the interviewer pitched a micrometer across the desk and said, ‘Read that for me.’ Thanks to Bennett teaching the student this skill, he got the job.

The citizens of Gleason have taken notice of Coach Bennett’s love for the town and the people in it. He was previously selected to serve as grand marshal of the Tater Town Parade in Gleason in recognition of his many contributions to the community.

When asked about his future plans, Bennett replied, “Enjoy retirement.”

Now that Mike and Sandy Bennett have retired, they are able to spend more time with their children and grandchildren.

The Bennett family includes the couple’s three boys – Michael Ryan Bennett, Adam Tyler Bennett and Colin Drew Bennett. Mike and Sandy are also blessed with five grandchildren, and there is another on the way.

Mike enjoys watching his grandchildren playing sports. “I’m spread pretty thin,” he said. “I have grandkids playing soccer in Martin and McKenzie, and grandkids playing T-ball at Dresden. Sometimes there are two games going on at once, so they’re hard to get to.”

In addition to spending time with his family, Mike’s hobbies include duck hunting and fishing.

“Gleason is a great little town to raise a family,” Bennett said. “That’s one of the reasons I’ve stayed here for the past 38 years.”