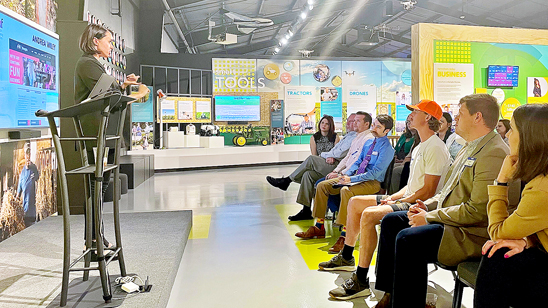 Andrea Wiley, vice president of account management at DCA Creative Communications Consulting and AAF District 7 regional director, sharing more about the benefits of a West Tennessee chapter of the club this summer at Discovery Park.

WEST TENNESSEE (October 5) – A group of advertising and communication professionals has come together to form The American Advertising Federation West Tennessee. This new chapter of The American Advertising Federation (AAF) will serve as a networking resource and tool for keeping up with the latest trends in advertising, technology, creativity and communication, especially for those working in West Tennessee’s rural communities.

A group of more than 75 professionals from around the region came together at Discovery Park of America in Union City this summer to hear more about the organization and explore the feasibility of a West Tennessee chapter. After a favorable response, the group collectively decided to move forward.

The AAF has more than 150 clubs across the United States. Headquartered in Washington, D.C., it is the oldest national advertising trade association in the country. The AAF also has 15 district organizations, each located in and representing a different region of the nation. AAF West Tennessee is part of district seven. The organization also helps more than 4,000 college chapter members kickstart their careers with more than 140 college chapter network and an array of student programs.

“As ‘The Unifying Voice for Advertising’ the American Advertising Federation delivers on our mission to promote and protect advertising, media and marketing through a unique, nationally coordinated grassroots network of brands, agencies, media companies, local advertising clubs and college chapters,” said Steve Pacheco, President and CEO of AAF National. “We are all truly excited to support this new chapter as they meet the needs of the growing West Tennessee business and industry community.”

Mandy Hinson, director of development for West Tennessee PBS, will begin serving a leadership role on the board as president in January 2022. “In my role at West Tennessee PBS, I have the pleasure of working with so many talented professionals in every type of business imaginable,” Hinson said. “I am certain both those working in media and those tasked with communicating about their products and services with the public will greatly benefit from a membership in AAF West Tennessee,” she added.

Discovery Park of America, a museum and heritage park in Union City, has purchased the first corporate membership for its marketing, sales and public relations team. “I have been involved in the AAF chapters in both Memphis and Washington, D.C.,” said Scott Williams, the museum’s president and CEO. “I know firsthand the benefits membership in AAF provides. In both markets, my primary vendors and industry friendships came out of my memberships in those clubs.”

The online portal to join the club will open on November 1, 2021. Those interested can sign up to receive an email reminder. A free celebration of the launch of AAF West Tennessee and info session will be held October 21, at 6 p.m. at Historic Ann’s 1893 in Union City. Included will be a cash donation bar and light appetizers. Guests may register for a free ticket at this link: https://aafwesttennessee.wildapricot.org/event-4507308.

In addition to networking and monthly lunches with a relevant speaker that will take place in various locations throughout West Tennessee, benefits of a membership in AAF West Tennessee include access to participate in special events hosted by the club, discounts on industry publications including Adweek, Advertising Age, and Brandweek along with discounts on other services including shipping, office supplies, rental car services, insurance and more. For more information or to join, visit AAFWestTennessee.org.