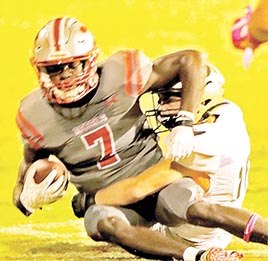 McKenzie High School Rebel Marquez Taylor, the junior running back for the team, helped lead the Rebels to victory Friday when it hosted the Dresden Lions. Photo courtesy of Dresden Quarterback Club 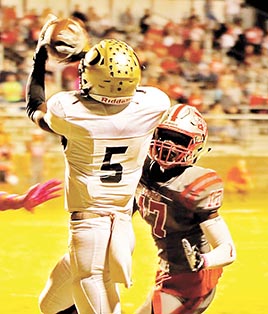 McKENZIE (October 1) – It seems when Dresden and McKenzie battle when both teams are state-ranked, the contest is usually a classic battle.

The trend held true Friday night at Rebel Stadium. In 1986, No. 5 McKenzie needed a last-second kick from Jason Baucum to edge the No. 9 Lions at Rotary Field, 3-0. Friday, the No. 6 Dresden Lions pushed the fourth-ranked McKenzie Rebels to the end, but the Rebels prevailed 23-14.

Both teams served as their own worst enemies. McKenzie suffered the wrath of 14 penalties for 130 yards, two flags nullifying touchdowns. Meanwhile, two Dresden turnovers resulted in 10 McKenzie points. It was a frustrating night for both teams, but a game that could serve them well as they venture into the playoffs.

McKenzie coach Wade Comer said his team needed a challenge like the one Dresden presented.

The Lions were well prepared for the Rebel offensive attack as junior running back Marquez Taylor found the sledding tough in the early going. He rallied late to finish with 22 carries for 130 yards and a pair of TDs.

Dresden coach Keith Hodge was visibly disappointed in the setback, but praised his team’s effort.

“Overall effort was fantastic. The thing about our kids is that they know the standard and expectations we have and they’re going to fight and go for four quarters, but we missed a ton of opportunities,” he said. “We missed a touchdown pass in the second quarter and missed three, possibly four, pick and against a good football team like that, you have to take advantage of those opportunities like they did with our turnovers.”

The Lions wasted no time in getting into the end zone. They marched 48 yards in six plays, culminating with Tatum Oliver’s 3-yard touchdown run with 9:27 to play. Mark Maddox added the PAT and the Lions led 7-0. Oliver had a good night, going 11-17 passing for 138 and rushing 22 times for 48 yards and a score.

“He got after it, made some great throws tonight and we gave him some time and that’s key to what we do,” Hodge said.

It seemed that Dresden was accumulating a bit of momentum when Raymond Johnson intercepted a Rebel pass on the ensuing drive. But Dresden fumbled when McKenzie’s Etijay Tharpe stripped the ball loose.

McKenzie quarterback Jackson Cassidy completed a 22-yard pass to Zach Aird, which set up the Rebels’ first score. Four plays later scored from the 9 with 2:30 to play in the first and Aird added the conversion to tie the game at 7.

Dresden and McKenzie battled to a stalemate in the second quarter until the last Rebel drive. The Rebels mixed up the pass and run when Rashad McCreary punched in from the 2 with :15 to play. The extra point failed, but McKenzie held a 13-7 lead at the break and would get the ball to start the half.

McKenzie’s first drive fizzled, but Dresden fumbled it back to the Rebels. From there, MHS got the Lion 5 where Aird booted a 22-yard field goal with 7:24 to play in the third. McKenzie led 16-7.

Dresden put the pressure on McKenzie between the third and fourth quarters when it ventured 76 yards in 13 plays, using 4:54, and scored on sophomore Tristan Jett’s 4-yard run with 7:23 to play in regulation.

The Rebels responded with a 46-yard drive of their own, ending seven plays later with Taylor’s 14-yard gallop to paydirt with 3:12 to play. Aird’s kick gave the Rebels a 23-14 lead, which would be the final.

“We faced a lot of adversity and a lot of self-inflicted wounds, but our kids fought well,” said Comer. “We had a lot of things not go our way. We made plays and a lot of times we made two or three plays when we needed them.”

Hodge said he was pleased with his team’s preparation this week.

The Lions, 5-2, have a pivotal battle at McEwen next week. The winner of that game will likely be regional runner-up and earn a home playoff games. The Warriors defeated Perry County 36-0 Friday night.

“We can bounce back. It’s about fixing our mistakes and learning and getting right back after it. We could have run the ball better, we just have a couple of things to fix,” said the coach. “McEwen’s kids play hard and get after it. They started out in the flexbone and now they are running some spread, so I don’t know what we’re going to get over there. It’s going to be a tough match and for second place in the region.”

McKenzie’s Cassidy completed 9-15 for 118 with an interception. He also ran eight times for 100 yards. Aird had three catches for 48 yards to lead McKenzie’s receivers. The Rebels had 387 total yards.

“I thought offensively we moved the ball well at times and overcame a lot of penalties and things we had to overcome,” Comer said. “Overall, it was a pretty good offensive night. We have to clean up a few things.”

The Rebels, 7-0, head to Gleason for a pivotal regional game against the Bulldogs this week. Gleason was off Friday night.

“It was a good step forward for us. When it got to crunch time and had to have a play, we had kids make them, a lot of different kids, defensively and offensively,” said Comer. “We have to get ready for Gleason. They always play us tough.”