I am not sure what I expected our country to look like in 2021, but I certainly did not expect it to be so fractured and so bogged down in hate. My oldest son was a year old when our country experienced the horrific events of September 11, 2001. The wave of patriotism following that day gave me hope for the America that my kids would inherit.

Fast forward 20 years, and that hope has been replaced by fear. I fear that our country and society have become so polarized on every issue that this country may not survive. In 1858, Abraham Lincoln said, “A house divided against itself cannot stand.” Never in America’s history has this quote been truer. In 1858, Lincoln was talking about the divide between free states and slave states.

In 2021, America is divided on a multitude of issues, and most of our society is determined to expand that divide rather than close the gap. My fear is that we have created technology and media platforms that not only created this divide but continue to drive a wedge into our society. These concerns are a driving force behind this year’s theme of National Newspaper Week – THE Community Forum, newspapers as the foundation of our communities. Let me first explain the problem we must solve and then offer a solution to uplift, looking to elevate an enlightened democracy.

Our country has become so polarized on every issue because of the information that we consume every day. We have completely lost our ability to see another point of view. There is no longer room in our society for difference of opinion, debate, disagreement or dissent. Any division in thought is met with anger, hatred and vile comments. These actions are in complete violation of the concepts that created America.

Our county was founded on the ideals of freedom, tolerance and acceptance, where all men were created equal with fundamental rights. People of diverse backgrounds and beliefs worked together to create these ideas and frame them into a new country with liberty and justice for all. They had many differences of opinion, but they compromised for the betterment of everyone. Now, we all know our country is not perfect. It never has been and never will be. These ideals have not always applied to everyone, but the beauty of our country is that it should continue to evolve. America is a concept, a target for which we are striving. Unfortunately, it feels like we are as far away from the target, as far from a perfect system, as we have ever been.

The questions for all of us are, how did we get here, and how do we evolve?

In June 1980, Ted Turner launched CNN, the first 24-hour news network. In 1989, CNBC was launched, followed by MSNBC and Fox News in 1996 and others. What started as a single network reporting the news has become Entertainment TV Programming with multiple networks now fighting for viewers, ratings, and advertising dollars. All these networks decided to appeal to a viewer with certain political leanings. They cater to their audience, and over time, their programming has become extraordinarily little about reporting the news as it happened, and all about commenting from their point of view and feeding their viewers what they want to see and hear. The reality is these networks are all about money, and in their chase for the almighty dollar, they have become 100 percent entertainment and have lost all of their journalistic integrity. They take actual news (facts) and package it up with commentary and opinion. They feed us the information that they want us to have, and most of us are unaware that we are consuming propaganda rather than facts.

In 2006, Facebook and Twitter launched, creating the social media trend. There are now three billion Facebook users worldwide, with 1.84 billion daily users (December 2020). Twitter has 200 million users as of First Quarter 2021. Social media was heralded as a breakthrough in human interaction and communication. Now with a click of a mouse, or a simple swipe on your mobile device, you can connect with anyone, or any group, anywhere in the world.

Obviously, our society has embraced all this modern technology and it has changed how we live and how we communicate. Unfortunately, this technology is being used to further the divide among the American public. These social networks work on algorithms designed to show you things in which you are interested. This explains why they are so entertaining and even addicting. However, many groups (corporations, political parties, movements, and even foreign countries) are exploiting all these platforms to divide us.

Social media has moved beyond a means of connecting with friends and family to the single most polarizing platform in this country. Think about your social media experience. How much negativity, hate, fear and bullying do you see? Whether the subject is politics, masks, vaccines, city, state or even neighborhood issues, anyone who disagrees are treating each other in the most vile, evil way possible. There is no discussion or civil discord, just polarized thought on right and wrong. We say things to each other, people we know and those we do not over social media that we would never have said to someone’s face. We treat each other without dignity or class. In fact, this manner of speaking to each other has become second nature to us, and we are starting to treat each other the same in person. The technology and platforms that we entertain ourselves with are destroying the fabric of our society.

The very nature of social media is to connect you to others that share your interests, and on the surface, seems great. However, it connects people with like interests, regardless of whether those interests are positive or negative. Social media platforms become an echo chamber of people sharing the same beliefs and same fears, regardless of what those are.

In 1971, Ted Kaczynski (The Unabomber) moved into the woods, radicalized his thoughts, and became a terrorist, killing three people and injuring 23 others nationwide. This was one man, working alone. In the not so distant past, these types of people were outcasts, their voices drowned out by the sane people in the room or in their community. In 2021, he would not be alone, he would be part of an extremist social media group, spreading his thoughts and feeding off the radicalism of others in a virtual mob effect.

As a country/society we need to get back to being civil with one another. We need to treat each other with dignity. We need to listen to one another and have the courtesy to listen to another viewpoint. We are not always going to agree, and that is a good thing. Differences of opinion lead to growth. We need to understand that there can be truth on both sides of an argument. Our job is to find the truth on either side and eliminate the non-truths. That is how we start to find common ground.

Masks are a huge argument all over our country right now. Is it possible that both sides could be correct in parts of their argument? Could it be that masks may help slow the spread of disease, but at the same time be detrimental to students learning in school? The issue is very rarely black and white but usually in the grey area in between. We need to understand that both sides of an argument can be correct and stop fighting, hating and bullying those who disagree with us.

A proverb states that a journey of 1,000 miles starts with the first step. What is our first step?

The first step is in our own mind. We must look at ourselves and what media and propaganda we are consuming. You have all heard the expression, “you are what you eat.” We are allowing our minds to consume these ideas of hatred and polarization. We need to get back to having civil discussion and treating each other with respect. To do this, we must regulate our media intake. The ideological echo chamber of “news” entertainment and social media around is constantly fighting against this concept. A society of civil discourse is bad for business for a media outlet or social media group pushing a certain agenda. Open-minded people are bad for their business.

After starting with ourselves, we need a new COMMUNITY FORUM for news, entertainment and connection with our community. Walter Cronkite was beloved by millions. Every night he told you what had happened that day. He did not give you his opinion, he gave you facts. You need the facts about what is going on in your community, and the only place to get that is your local newspaper. Your local newspaper is embedded in the community. Local news has a much bigger impact in your day-to-day life than national/regional news. City Council, Zoning, School Board, Local Elections all have profound effect on your daily life. Engage with your local newspaper in making your community a better place. Attend town halls and community events. Help hold your local elected officials accountable.

Each of us has a part to play in fixing our society, a civic duty. We can ignite a wave of change in our country, but it must start local. Our government and leaders reflect our society’s values. If we want our government and leaders to change, we must change. This change starts with your Community Forum. Subscribe to your local newspaper today, in print or online. Support Local Journalism, engage in activities that build up your communities. 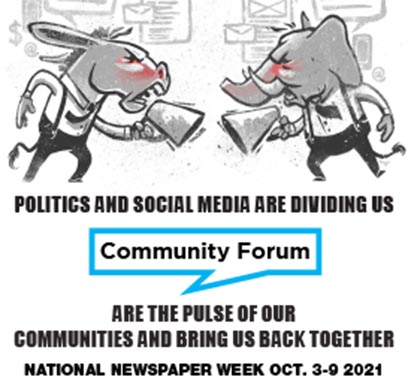