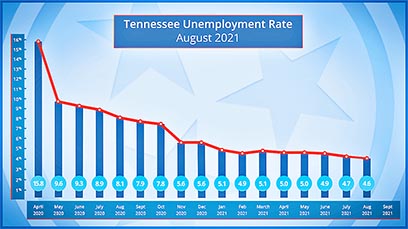 As Tennessee’s economy continues to rebound, the state has experienced three consecutive months of lower unemployment, according to newly released data from the Department of Labor and Workforce Development (TDLWD).

NASHVILLE (September 23) — The jobless picture continues to improve in Weakley and neighboring counties, as well as in the vast majority of other Tennessee counties.

According to the Tennessee Department of Labor and Workforce Development, this marks the second consecutive month the jobless situation has improved in 93 or more of the state’s 95 counties. Additionally, unemployment statewide improved for the third consecutive month in August. The rate ticked down from 4.7 percent to 4.6 percent.

A breakdown of unemployment rates across Tennessee indicates jobless numbers were lower in 93 counties and less than 5.0 percent in 79 counties. The remaining 16 counties had August rates of 5.0 percent or greater, but less than 10 percent.

Unemployment across the state during the month of August was 3.5 percent lower than it was in August 2020.

Nationally, the jobless rate decreased by 0.2 percent from 5.4 percent to 5.2 percent. The latest rate is down 3.2 percentage points from this time last year.

Unemployment Down In Weakley and Neighboring Counties

Weakley County’s unemployment rate of 4.1 percent for the month of August was down 1.4 percent from July’s rate of 5.5 percent, and it was 1.5 percent lower than August 2020’s jobless rate of 5.6 percent. It was 1.1 percent lower than the national rate of 5.2 percent, and 0.5 percent less than the state average of 4.6 percent. Out of a total countywide labor force of 15,110 workers, 14,491 Weakley Countians were employed and 619 were unemployed.

Carroll County’s jobless rate was 4.4 percent for August, which represents a decrease of 0.5 percent from the previous month’s rate of 4.9 percent, and a 2.2 percent decline in unemployment from August 2020. It was 0.8 percent below the national rate and 0.2 percent lower than the state average. Out of a total countywide labor force of 11,784 workers, 11,265 were employed and 519 were unemployed.

Gibson County registered 4.4 percent unemployment for the month of August, which is 0.3 percent less than the previous month, and 2.3 percent below one year ago. The jobless rate was 0.5 percent lower than the national rate, and 0.2 percent below the state average. Out of a total countywide labor force of 21,655 workers, 20,706 were employed and 949 were unemployed.

Henry County recorded a jobless rate of 4.2 percent during August, which is 0.5 percent lower than July’s rate of 4.7 percent and 2.3 less than it was at the same time last year. Unemployment was 1.0 percent less than the national rate, and 0.4 percent below than the state average. Out of a total countywide labor force of 13,541 workers, 12,978 were employed and 563 were unemployed.

At 4.9 percent, Obion County’s unemployment rate for August fell 0.9 percent from the previous month, and it was 1.9 less than in August 2020. Unemployment was 0.3 percent below the national average, but 0.3 percent more than the state rate. Out of a total countywide labor force of 11,991 workers, 11,402 were employed and 589 were unemployed.

Employers brought an additional 4,400 employees into the workforce between July and August. The manufacturing sector had the largest increase in employment, followed by the mining/logging/construction sector, and then the government sector.

Between August 2020 and August 2021, employers across Tennessee increased the state’s workforce by 121,600 jobs. The professional/business services sector accounted for the largest percentage of that growth. The leisure/hospitality sector added the second-largest number of jobs, followed by the trade/transportation/utilities sector.

There are currently more than 470,000 open positions across Tennessee. The state is working to help unemployed Tennesseans become TN Work Ready, so they can successfully rejoin the workforce. Job seekers can find a multitude of online and in-person resources by visiting www.TNWorkReady.com.

The state is ready to help job seekers become TN Work Ready, so that they have the tools needed to find meaningful employment and reenter Tennessee’s workforce. They can start their journey by reviewing what assistance is available to them at www.TNWorkReady.com.

Another valuable source for those seeking employment is the Tennessee Virtual American Job Center (VAJC) at www.TNVirtualAJC.com allows Tennesseans to research different programs that can help them remove barriers to employment so they can more easily reenter Tennessee’s workforce. The VAJC allows job seekers to do this on their schedule, anytime, anywhere. ApprenticeshipTN.com is another valuable website to check out. Additionally, there are more than 80 American Job Centers across the state can provide a starting point to a new job.