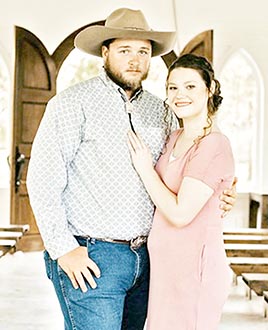 Mr. and Mrs. Patrick Powers of Dresden would like to announce the engagement and forthcoming marriage of their daughter, Michele Nicole Powers to Hunter Shayne Dakota Harcrow of Milan. Hunter is the son of Darrell Harcrow of Carrollton, Alabama, and Memrie Walker of Milan.

The bride-elect is the granddaughter of Lou Ann Powers and the late Al Powers of Dresden; Mr. and Mrs. Gerald Ray of McKenzie; and Sandra McAlpin of Dresden.

The groom is the grandson of Rusty Walker of Carrollton, Alabama; Shamora and Allen Duffie of Candler, North Carolina; and Janice Harcrow and the late Samuel Earl Harcrow of Ethelsville, Alabama.

Michele is a 2018 graduate of Dresden High School and a 2021 graduate of TCAT in Paris where she received her LPN license. She is currently employed at Weakley County Nursing and Rehab Center in Dresden.

Hunter is a 2014 graduate of Milan High School. He attended Murray State University and Jackson State Community College. He is employed at Green Valley Plant Nursery and Sod Farm in Three Way.

The couple will exchange vows on Saturday, October 2, at The Venue at Waddell Place in McKenzie. The ceremony will begin at 4 p.m, with music beginning at 3:30 pm. All friends and relatives are invited to attend.

The couple will travel cross country for their honeymoon and will reside in Dresden following their wedding.