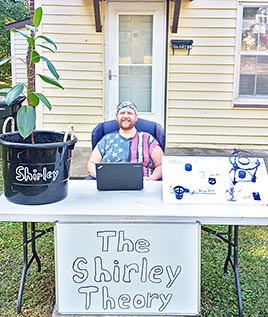 Chace Kesterson of Dresden has found ways to harness solar energy to help a cutting from a rubber plant grow to more than five feet tall as well as power a small fan.

The Shirley Theory is a method for using an optical instrument to concentrate photon molecules in sunlight into a beam directed onto a solar panel increasing the amount of energy. When photons in sunlight are concentrated using a simple optical lens such as a magnifying glass, the molecules get very hot and produce more energy. I tested this theory on a modified solar panel of my own creation. Most of the gadgets and gizmos used came from items donated by the general public at Santa’s Helpers, WE CARE, and a few I bought from the Dollar Tree.

The process for testing this theory began with finding a way to measure the amount of energy absorbed without a multimeter because I couldn’t afford one. So, I figured out a way I could use time to test the amount of energy absorbed. I bought two outdoor solar panel lights and a small purple fan from the Dollar Tree. Each solar panel consisted of 1 rechargeable battery in which I took out and used the electric fan motor to drain all the power out. I put one of the depleted batteries back into Solar Panel 1, set it out in the sunlight for 5 minutes exactly using a stopwatch bought from WE CARE, and then took the battery back out. Using the stopwatch, Solar Panel 1’s battery ran the fan motor for 3.27 seconds. Using the same process my Modified Solar Panel 2’s battery ran the fan motor for 8.13 seconds. Modified Solar Panel 2 had an increase of energy by 148 percent. Each test was as consistent as the next during longer periods in the sun at different times throughout the day. Every test yielding almost 3 times as much energy absorbed.

This theory won’t get solar panels where they need to be, but it’s a start. If every solar panel grid on the planet applies this theory, each grid will absorb 3 times the amount of energy daily. With the proper optical lens, modified solar panel, and placed in the right spot my calculations determined the amount of energy can be increased by 100-fold. The closer the solar panel to the sun, the more energy which can be absorbed so the best spot to put solar panels is in between the Tropic of Cancer and Tropic of Capricorn. Basically, direct rays of sunlight hit the earth all along the equator making it the most efficient spot to put solar panels. Professors and students studying solar energy at the University of Tennessee at Martin; you have the tools, lab, and funding to apply such a theory to the best solar panel components and optical lenses money can buy as I cannot. I was merely able to build one on a small scale to test my theory with what little I have. It worked and I knew it would work even before I tested it. Study this theory for the world needs more energy.

Now the origins of my theory. A friend named Shirley, who worked sewing in factories alongside my mother right here in Dresden, died some time ago of COPD. Although she lacked the will to quit smoking, I researched every way possible too at least eliminate the toxins from the cigarette smoke and replace it with fresh oxygen.

My researched deduced that a rubber plant fit the criteria for eliminating air toxins and replacing them with fresh oxygen. Just so happens the Weakley County Library has rubber plants and Director Candy McAdams allowed me to have a clipping off one. I put the clipping in water and stuck it beside Ms. Shirley’s bed. Although riddled with pain, each day I went to visit it always brought a smile to her face watching it grow and knowing I did my best to save her. After she passed away, I asked her family if I could keep the rubber plant. The clipping was six inches at the time, and today it sits by my bed standing at more than five feet tall. I named it Shirley.

This chain of events is what led me to the discovery that when photons are concentrated into beams, the concentrated beams produce more energy than flat-out sunlight. As Shirley grew, I noticed when I used just simple blinds to concentrate sunlight into beams; the rubber plant grew faster with leaves twice as big and twice as dark compared to those at the Weakley County Library. Shirley was absorbing more sunlight energy thru the beams then flat-out sunlight making it bigger and stronger? This means ‘The Shirley Theory’ can not only be applied to solar panels, but in facilities that house the growth of plants and trees. If the diameter of the beam from photon molecules through an optical lens is increased and calibrated precisely to the point it won’t burn the leaves of a plant, then the beam itself will provide more sunlight energy to the plants. This effect will help plants to grow faster, larger, and produce more food. Imagine being able to cut the growth of plants and trees in half.

Last but not least, if you’re an avid reader of mine, then you already know this article wouldn’t be complete without a passage from my favorite book, The Holy Bible. In Genesis 1:16 “God made two great lights – the greater light to govern the day and the lesser light to govern the night. He also made the stars.”

The past year and a half I’ve focused a great deal of my time on the greater light and its potential. Most people in their spare time like to go hunting, fishing, or whatever hobby one might enjoy. I love to solve problems. As technology evolves so does the demand for power. In a world filled with so much darkness right now, maybe this will shine a little light. I didn’t think of this idea to fight fossil fuels. I didn’t do it for climate change. I didn’t do it to please a Democrat or a Republican. If ‘The Shirley Theory’ helps to keep just one family a little warmer in the winter or cooler in the summer, then my idea was a success. No reward or Nobel Peace Prize is necessary, just the simple thought I tried my best to help make the world a better place. May this article stand as proof of this knowledge.