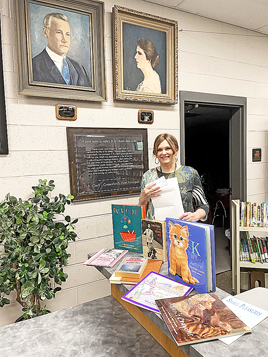 Judy Martin, the librarian at Greenfield School, began digging for answers on the school’s first principal and netted not only more information on the library’s one-time namesake but a generous donation from the family of authors. Niki Leopold recently replied to Martin’s inquiries with books from her father and her own children’s books and poetry as well as a donation of $20,000.

GREENFIELD (September 20) – “A good name is rather to be chosen than riches,” reads the plaque beneath the portraits of Thomas B. and Ethel Clark in the Greenfield School Library. Recent events suggest that sometimes one could lead to the other.

The Clarks on canvas, along with school librarian Judy Martin, oversee all that goes on among the shelves of books and carts of laptops and other technology that would astound the first principal of the school. The paintings, done by son Blake, are what prompted a gift of more books and the resources to purchase even more electronic wizardry.

But before revealing the climactic conclusion of what started as a modern-day mystery, let’s allow the story to unfold.

Martin is nearing the end of a four-decade long career in education and is tidying up the library of what is her alma mater. Acknowledging that as a student, she had only a vague awareness of what was then called the T. B. Clark Library, she determined that as the librarian, she wanted to know more. After all, even though the merging of the elementary and high school libraries had resulted in a library name change a decade before, she had spent the last four years with the couple looking over her shoulder.

Using Google rather than old newspaper clippings and/or microfiche that would have been employed by former librarian sleuths, she went in search of possible Clarks still residing in West Tennessee and discovered just how appropriate naming the library for the former educator had been.

Son Blake earned a doctorate at Vanderbilt and, after teaching and a stint in the military, became a roving editor for Reader’s Digest magazine for more than 30 years. His wife Deena was one of television’s first female news reporters. During her career she hosted news programs on NBC and CBS and interviewed dignitaries and celebrities including John F. Kennedy, Lady Bird Johnson, and Bob Hope.

The two had a daughter. Nikia “Niki” Leopold is where the tale moves from online clues to a spellbinding ending. Having traced the connections, Martin learned that Leopold was a writer, poet, illustrator, and teacher. She also found an email address.

The Greenfield native’s first communication was brief and offered the now septuagenarian living in Maryland the chance to reclaim the portraits. Leopold’s reply noted her father had painted the works and since she had the original photographs from which he’d drawn, she would be pleased for the paintings to “stay right where they are.” She also included the confession that she had not known her grandfather well and knew mostly that her grandmother loved to read and was a “devoted gardener and maker of rice crispy cookies.”

She also offered to send copies of hers and her father’s books.

Martin, who had by this time discovered that Leopold had authored and illustrated children’s books and collections of poetry, immediately responded and, after sharing a bit more of her own story, asked for more family biographical information. “This would make for a great story for our local county newspapers The Dresden Enterprise and The Weakley County Press,” she typed.

Leopold’s response was equally as swift. She wrote of the romantic beginning of her grandparents’ relationship – a young 17-year-old running off to marry her “considerably older” suitor.

“Her parents weren’t enthusiastic about the marriage,” she wrote. “But it turned out very well. They were a close happy couple and rarely argued. I remember my father saying the only reproach she would make to Grandfather’s small outbursts was, ‘Oh, Tom.’ Gently said.”

She explained that her father and mother met on the ship that was taking him to what would be his ten-year career as a University of Hawaii English professor and her to her first teaching job. Blake Clark was on Oahu when the Japanese attacked Pearl Harbor. His eye-witness account became a book, “Remember Pearl Harbor,” and that book was eventually condensed in the Reader’s Digest series which led to his long tenure with the magazine.

After a move to Washington, D.C., Deena Clark began her career of interviewing “ambassadors, politicians, and people in the arts” and Leopold’s calls it a “very lively time for my parents.”

Leopold continued the family tradition of both embracing learning and writing. With degrees from Smith College, Columbia University and time spent in John Hopkins Writing Seminars, she too began writing and drawing professionally.

Copies of both hers and her father’s works were included in a package that Martin received last week. The package also contained a handwritten note.

“I’m sending some of my father’s books and my own to the Greenfield School Library with a donation. You have been wonderful to keep the memory of my schoolmaster grandfather flickering. I am most grateful,” it read.

Shocked by the gift’s size and grateful to both know more about the family’s word-focused heritage, Martin has already begun researching what books for students, furniture, increased technology, and resources for the teachers she can add to the library. And what won’t be leaving are the paintings, positioned high on the wall behind her. Thanks to the curious and tenacious librarian, the principal’s rich legacy continues. 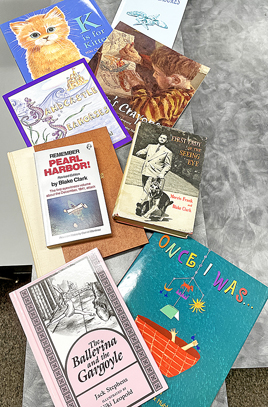 Niki Leopold recently replied to Martin’s inquiries with books from her father and her own children’s books and poetry as well as a donation of $20,000.