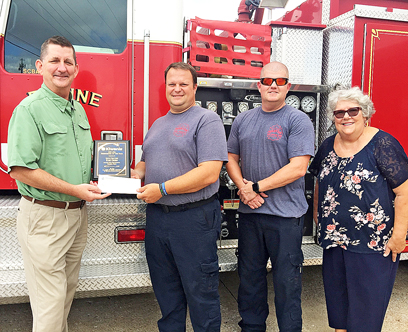 RECEIVES KIWANIS DISTRICT AWARD FOR FIREFIGHTER OF THE YEAR — John Mayros (L to R), incoming president of the Martin Kiwanis Club, presents a plaque and check to Kory Green, the 2021 winner of the Louisiana-Mississippi-West Tennessee Kiwanis District Firefighter of the Year award. Firefighter Green works for both the Martin and Dresden, fire departments and is much respected for his work both locally and statewide. Others in the picture are firefighter Josh Wilson, the 2020 winner of the Kiwanis local and district Firefighter of the Year awards (West Tennessee has received back-to-back awards.), and Linda Ramsey, Martin Kiwanis member who nominated both firefighters and is a past Kiwanis governor. Kory Green will present his $250 award to the National Fallen Firefighter’s Association. In 2020, Wilson presented his award to the Anna Kate Wenz FIGHT Foundation, named for Mike and Jennifer Wenz’s three-year-old daughter who died in March 2016 after a courageous battle against cancer.