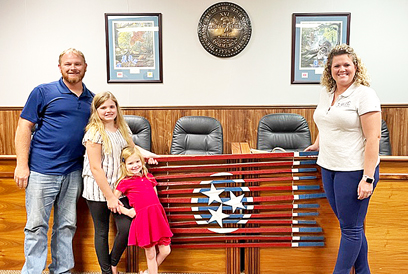 Josh Lassiter was appointed public works director, during last week’s meeting of the Dresden City Board. He is pictured with his wife, Melesa, and their two children – Gentry, age 10 and four-year-old Ramsey. Josh’s family presented him with a woodcraft gift representing the Tennessee State Flag, crafted by Andy Holt and his son, Andrew.

Mayor Jeff Washburn recommended Lassiter for the position of full-time Public Works Director and for him to serve as a department head for the City. The mayor said, “Lassiter has been acting as the interim director since May and has done a great job.”

Lassiter was appointed to the post by a vote of 4 to 0, with aldermen Willie Parker, Ralph Cobb, Gwin Anderson, and Kenneth Moore all voting yes. Aldermen Lyndal Dilday and Sandra Klutts were absent.

Mayor Washburn reported an industrial prospect has expressed interest in the property on Swanson Drive. He stated the company produces construction materials from hemp and they propose to employ 50-65 individuals.

The mayor also stated he has been involved in meetings concerning the consolidation of the Chamber of Commerce and Weakley County Economic Development Board.

According to Mayor Washburn, Parks and Recreation Director Joey Winstead was approached about the City’s interest in purchasing property adjacent to Wilson Park. The mayor stated he responded to the inquiry as the City would be interested in discussing the purchase for the purpose of expanding the park programs. The consensus of the Board was that they were in favor of learning more about the potential purchase and pursuing this opportunity.

Gwin Anderson asked about the application to the Blue Cross Healthy Places grant for playground equipment to be installed. Anderson asked why Park Street was selected as the site to install the equipment. Mayor Washburn explained there were numerous children in this area that would benefit from the addition of playground equipment at this park. He stated the children in this area are not able to walk or bike to other areas of the City to utilize the assets at Wilson Park. Anderson mentioned the need to beautify this area if the grant were to be received, and Mayor Washburn agreed.

Mayor Washburn updated the board on activities that have taken place over the last month. He stated milling began on Linden Street earlier that day. He also reported patch work would be done on certain streets and pricing would be obtained to pave short sections of various streets.

Alderman Moore asked Lassiter about the number of water leaks in the City. The newly-appointed public works director stated there were probably 8-10 leaks on the list at this time, and repairs will be made according to their severity.

Alderman Moore asked Lassiter if he was aware of a water leak on Highway 22 headed toward Martin. He stated there was one near Cuddles and Crayons daycare. Moore asked if Lassiter would contact that property owner and let them know he is aware of the leak and would be repairing it as soon as possible. Lassiter stated he would take care of it.

Alderman Cobb asked about the status of resolving the drainage problems in the parking lot of Vaughn Bros. Hardware. Mayor Washburn stated costs have been obtained and discussion has been held on how best to repair it. The mayor stated there may be a need to involve the engineering firm and bid the total project out.

The board unanimously approved a resolution authorizing the city’s acceptance of $100 from an anonymous donor by a vote of 4 to 0.  The funds are earmarked to be used by the Dresden Police Department.

A second resolution, which budgets the $100 donation and places the money in a line item for the purchase of small items and equipment, within the General Fund budget was also unanimously approved.

Additionally, the resolution contains an amendment to the Water Fund transferring $3,150 from the line item for retained earnings and moves it into professional services, due to the smoke testing of city sewers costing more than budgeted.

Chace Kesterson of 240 Jefferson St. presented his modified solar panel to the Board showing how he used a modified energy source to power a tabletop fan.

With no further business to discuss, the meeting was adjourned.