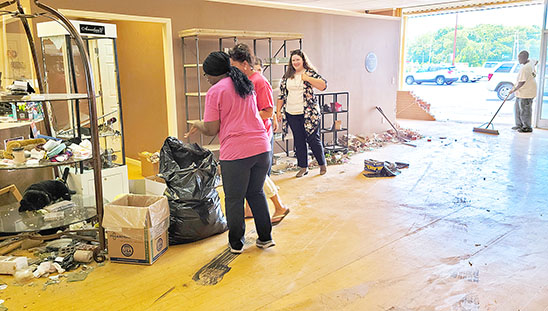 Workers at Bob’s Pharmacy in Dresden worked to clean up wreckage left behind when a woman drove through the storefront Tuesday morning. According to Dresden Police Department Officer Ethan Lee, the driver, Elizabeth Mull of Dresden, told officers she became startled when she pulled into the parking lot in front of the store when a truck apparently honked and she hit the gas pedal instead of the brake. Two customers were injured as a result. One was airlifted from the scene with back pain and a juvenile shopping inside the store suffered lacerations. Mull and her passenger were reportedly uninjured. Bob’s Pharmacy customers are asked to use the drive-through window on the back of the building for medication pick up until further notice. The Dresden police and fire departments, along with Weakley County Ambulance Service and Weakley County Municipal Electric System responded to the scene. Photo by Jasmine Williams/The Enterprise