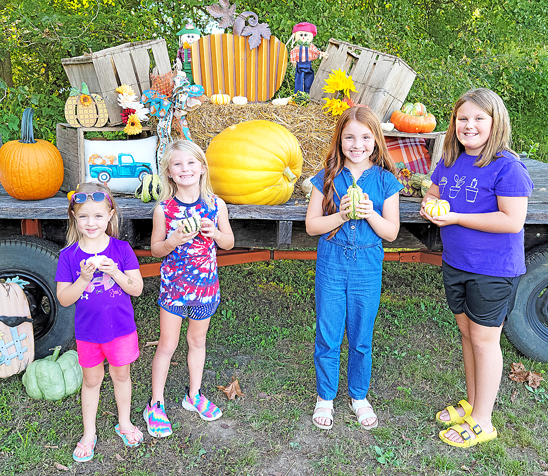 DRESDEN (September 9) – Summer has begun to cool into autumn days filled with all of the traditional items that are synonymous with the fall season. One of those autumn staples that comes to mind, which are used to make pies, paint, carve, and serve as décor for the house and yard, are pumpkins. Pumpkins and fall flowers are beginning to emerge as one local family that has been growing pumpkins for eight years, shares its bounties with others.

The Parham family, consisting of Lindsey and Kurt Parham, along with young daughters, Maddie and Hailey, grow pumpkins for those across the area to purchase this specialty fall items. The pumpkin farm operation began when Lindsey, an agriculture teacher who worked with FFA students selling mums and pumpkins as a fundraisers, decided to expand their offerings. Her husband, Kurt, then explained to the FFA, the organization would be able to make more money if the family grew the pumpkins themselves. That prompted the family to begin growing pumpkins on the three-quarters of an acre the first year.

They have since grown in size, planting six acres last year. They sold out and have now expanded to eight acres this year. They grow anywhere from 12,000 to 15,000 pumpkins and have been, “…very fortunate,” in selling out in years past.

The pumpkins are picked from the field and brought to one place for families to select their products. There is an honor system with a money box in place for customers to drop off cash in exchange for pumpkins. The family also offers easy-to-read price signs and have pumpkins on logs, raised off the ground, to help older customers pick up pumpkins, along with wheeled carts.

The money that is raised goes toward the cost of growing pumpkins, along with donations made to local daycares and homeschool groups. But the rest of the money goes to the Parham girls’ college funds.

The daughters, Maddie and Hailey, are students are Dresden Elementary School and helps their parents with planting and picking the pumpkins. The girls said they think it’s really cool they grow and sell pumpkins. “I like to paint and carve the pumpkins,” Hailey noted.

Lindsey Parham said that it was important that the two girls help with the farming, “This is our way of trying to instill a good work ethic with our kids and we make them work out here. They help plant and pick. They will sit out here and sell their grandmomma’s cookies and they usually giveaway lemonade.”

The family does not only sell to individual families; it offers wholesale pricing to FFA chapters in the area, grocery stores, and nurseries. McKenzie and Westview’s FCCLA chapters are currently selling their pumpkins.

Along with growing pumpkins, a local photographer approached the family about growing fall flowers to be used as a background for portraits and photos. The farm also offers a sunflower and zinnia patch backdrop for photos to be taken by families picking out their pumpkins for the season.

Lindsey Parham serves as the (CTE) Career and Technical Education Director for Weakley County Schools and husband, Kurt, is a lineman with TVA.

Oldest daughter, Maddie shared, “They should definitely come out here,” adding that people should not be scared of their dog, Macy.

Parham Pumpkins can be found on Facebook. They sell their pumpkins at 1250 Jewell Store Rd., in Dresden. They are open sunrise to sunset, all week until sold out.