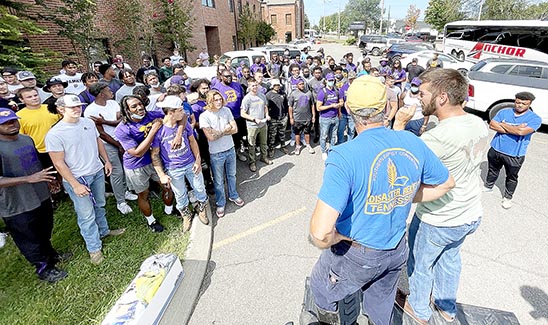 Members of Bethel University’s student body and staff traveled to Waverly over the weekend to assist in the town’s clean-up efforts after a flooding event left people without homes and massive devastation.

A group of Bethel University student athletes and staff members traveled over the Labor Day weekend to Waverly, Tennessee to assist the community in its recovery from the historic flooding that struck the area in August.

The group — made up mostly of members of the football team — aided residents in their continuing cleanup efforts. They were inspired to help in part by the direct impact the devastation had on several current and former Wildcat athletes.

“From the time we heard about the tragedy in Waverly, our coaches and players have been inquiring how we could mobilize to help. It became of utmost importance when we learned that several of our current and former Wildcat family were impacted as well,” said Senior Associate Director of Athletics Brad Chappell.

The initiative was supported with a donation drive by coaches Starla Cupples and John Weeks of the volleyball and softball teams, respectively, to collect supplies and food to be used in the effort.

“Our friends at Anchor Transportation and MMI Dining have been crucial to pulling this together as well. Some of our student-athletes gathered supplies that we could donate and of course our football team was adamant about getting ‘boots on the ground,’” Chappell said.

Director of Sports Information Dave McCulley said that the Waverly First Baptist Church was a huge help in the organization of the day that was themed from Isaiah 6:8 “Here I am Send Me.”

“Our Associate Chaplain Garrett Burns has been instrumental in facilitating contact with FEMA and the sheriff’s office. When members of our family hurt, we hurt. To be able to offer assistance in any fashion helps begin the healing process. There is still lots to be done but hopefully our efforts have provided some comfort for those in the path of the flood,” Chappell said.

Chappell added that servant leadership is a core value of the National Association of Intercollegiate Athletics’ (NAIA) Champions of Character program.

The day of service in Humphreys County was the culmination of a busy week for the football Wildcats. The team left for Waverly early Friday morning after returning to McKenzie late Thursday from a trip to Cleveland, Mississippi, to face the Delta State University Statesmen in the season’s first game.

Bethel University is a private, not-for-profit university affiliated with the Cumberland Presbyterian Church located in McKenzie, Tenn., offering both on-campus and online courses.