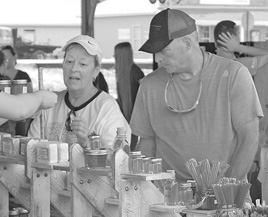 Homemade barbecue and specialty rub-maker, Jim Crawford is a regular vendor at the Martin and Dresden Farmers Markets.

Crawford began making sauces because he and his friends could not find anything they liked in the grocery store. “Friends asked me if I could develop one,” Crawford says.” So, I did.” He more than rose to the challenge. His one experiment, more than 30 years ago, has turned into a display featuring eight different flavors in a variety of temperatures. Each one ranges from mild to hot and all are without vinegar, in accordance with state regulations.

The reason why vinegar is not allowed has to do with it being among a select few ingredients requiring a permit to be manufactured. Mike Brown, Food and Business Consultant with the TN Department of Agriculture explains, “Every component of a product that falls within a risk category must be obtained by an approved, permitted source.”

Even though Crawford has been making his barbecue sauce and rubs for more than 30 years, he has only been selling at the Farmer’s Market for five of those years. When asked about expansion into other areas and plans for the future, Crawford says, “I’ll probably just stick with this. I stay busy enough and this is really a hobby, as much as a business. You could say, this is my retirement plan.”

Mark Willis, a tool and die maker, has been doing his job for more than 15 years. He works out of his home in Sharon. For those unfamiliar with what a tool and die maker does, they set up and operate machines which produce tools and metal parts and instruments. In addition to this precision work, Willis and his wife, Penny, are blackberry farmers.

When asked about the leap from tool and die to blackberries, Willis says, “I grew up a farmer. You have to pursue life and the way you can make a living.” In one day, the Willis duo picked more than 80 quarts of blackberries on their farm.

Penny decided to make a batch of jelly to see how it would market. Willis had some on hand the day of the interview and the sample was sweet and delicious.

When asked if they would expand into any other area, Willis said he and his wife were “not interested in working ourselves through retirement.” They also raise other vegetables, but blackberries will continue to be their primary product. His blackberry patch consists of ten 36-foot rows at the end of his house with and another 300-foot area not far from there. It was a side-project that became much, much more. “We started them (blackberries) as a retirement project, but they’re coming in so much and we can’t retire yet, but we manage to get done.”

The 300-foot area has since doubled. The biggest obstacle the Willis’ face now, is the weather and the labor divided between just two people and 600-feet of blackberries.

In addition to people coming to his house to get his blackberries, Willis also has “Penny’s Berries” jelly in “Tate’s,” grocery store in Greenfield. While he’s not interested in being “The King of Blackberries,” Willis says he appreciates the income they bring in.

“When I do retire,” Willis says,” I’m sure it’s going to make me enough ‘worm-money’ that I can go fishing.”