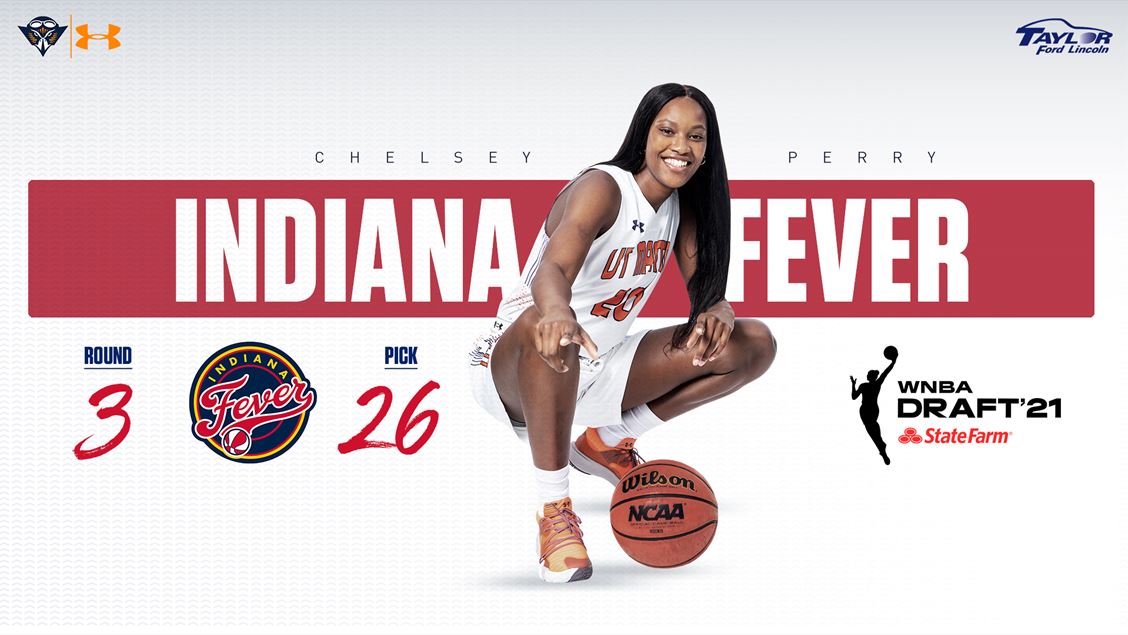 INDIANAPOLIS, Indiana (May 14) – Former University of Tennessee at Martin women’s basketball standout Chelsey Perry has left an early impression with her new team by breaking camp with a coveted roster spot with the Indiana Fever as the 2021 WNBA season tips off on Friday.

A native of Middleton, Tenn., Perry was selected by the Indiana Fever with the 26th overall pick in the third round of the 2021 WNBA Draft. Perry was one of seven selections taken in this year’s draft by the Fever and entered training camp as one of 20 players competing for 12 final roster spots.

The 6-2 forward left her mark through training camp and in her two preseason opportunities. In two preseason games she averaged 11.5 points, 3.0 rebounds, 2.0 assists, 0.5 assists and 0.5 blocks in 15.5 minutes per game while shooting 53.3 percent from the floor and 66.7 percent from beyond the arc. Her best game came in the preseason opener against the Chicago Sky when she scored a game-high 16 points off the bench in 15 minutes of play by knocking down 6-of-10 shots from the field – including three trifectas – while also grabbing four rebounds.

Perry left UT Martin as one of the program’s all-time greats. The two-time OVC Player of the Year and three-time All-OVC pick scored 1,963 points for her career while tallying 768 rebounds and 228 blocks. During her senior campaign she was named OVC Player of the Week five times while leading the league in scoring (22.9 ppg), field goal percentage (50.2 percent) and field goals made (164).

Perry and the Fever open the 2021 season on Friday, May 14 when they travel to play the New York Liberty in the Barclays Center on NBA TV at 6 p.m. CT. Indiana will have its home opener on Sunday, May 16 against New York on CBS Sports Network at 1 p.m. CT.