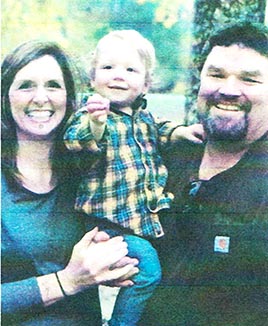 In 1989, the family farm was purchased by John and Joyce’s son, John Michael and Laurie Wilson, who became the fifth owners. Michael studied engineering at UT Martin and since graduation, has worked with Dickson Electric. He and Laurie, who teaches at The Discovery School, have four children – Sarah (Hand,) Megan, Leah, John Garrett, and a grandson, Silas. Michael comes home on weekends to continue the farming tradition he experienced with his father, John, who died in 2015, shortly after he and Joyce celebrated their 60th wedding anniversary.

Michael has been assisted by his son, John Garrett, and brother, Scott, who retired from Nashville Metro Police, and has farming interest in the area. Joyce still resides at the home place, calling it her favorite corner of the world. She has enjoyed traveling all across the United States with daughter, Natalie, who is employed by Nashville Electric, and has a son, Barrett Brewer and grandson, Jackson. Joyce has been assisted with her many writing projects by daughter, Sherry Stinson, who works with Nashville Habitat, and has sons, Brett and Daniel.

Joyce is called “the Matriarch of Billingsby Road” by her children because she is the oldest living resident in the neighborhood. She once answered a survey when her family was young, answering the question: “what age would you like to live to be?” She randomly threw out “80,” then decided nobody wanted to become that elderly, and changed her answer to 75.  She is profoundly grateful for the extra years she has been allotted.

Since the beginning of time, civilizations have fought for possession of the land. Generations rise and fall and centuries pass into eternity, but the land remains – a legacy and heritage to be protected and revered.

Deut:8. “For the Lord thy God bringeth unto thee a good land, a land of brooks of water, of fountains and depths that spring out of valleys and hills.  A land of wheat and barley … when thou has eaten and art full, then thou shalt bless the Lord thy God, the good land which He has given thee.”

Editor’s note: This is the final part in an historical series provided by Joyce Billingsby of the Latham community. This series spotlights historical events and family members connected to Billingsby Farms, which was recently named a Century Farm.