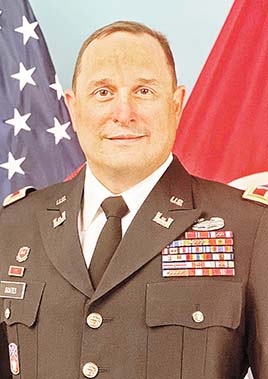 JACKSON (April 11) – The Tennessee National Guard’s 194th Engineer Brigade performed a change of command and change of responsibility ceremony at the National Guard Armory in Jackson on Sunday, April 11, involving the promotion of a Greenfield soldier to a top leadership position.

Scates, who served as the executive officer for the 194th, has more than 31 years of military experience. In a ceremony prior to the change of command, Scates was promoted to colonel.

Outgoing commander, Col. Ross, has served as commander of the 194th Engineer Brigade since 2017. During his command, Ross deployed with the 194th to the Middle East, from which they returned earlier this year. Additionally, he led his brigade in supporting Tennesseans throughout the tornado response last March, COVID-19 testing and immunizations, and civil disturbance operations.

During his long and productive military career, Col. Scates has served in various top leadership and staff assignment positions within the Tennessee Army National Guard.

Prior to his role as executive officer for the 194th Engineer Brigade in Jackson, Scates served as commander of the 230th Engineer Battalion in Trenton. He also held numerous leadership and staff positions in Jackson, Trenton and Union City.

Col. Scates’ educational background is extensive. He earned a Bachelor’s Degree in Biological Sciences from the University of Tennessee at Martin in 1992, a Bachelor’s Degree in Physician Assistant Studies from Trevecca Nazarene University in Nashville, Tennessee in 1999; Master of Science in Rural Primary Care from Alderson-Broaddus College in Philippi, West Virginia in 2002; and a Master’s of Strategic Studies from the United States Army War College in July 2018. He is also a graduate of the US Army War College, Intermediate Level Education, CAS3, the Ordnance Officer Advance Course, APG, MD, and the Engineer Officer Basic, Fort Leonard Wood, Missouri.

Concerning his civilian occupation, Col. Scates’ serves as Program Director for the Physician Assistant Program at Bethel University in McKenzie, and works as a Physician Assistant-Certified in Family Practice/Internal Medicine at Dresden Medical Clinic in Dresden.

The 194th is one of nine engineer brigades in the Army National Guard and consists of more than 2,000 soldiers. Subordinate units are located throughout Tennessee.