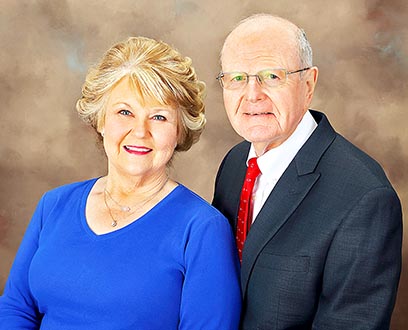 Michael “Mike” Parham and Norma Moody Parham were married July 2, 1977. Mike and Norma are the proud parents of Kurt, married to Lindsey Donoho Parham, and Kyle, married to Brandi Young Parham. Their four grandchildren are Abbie, Maddie, Hailey, and Rachel. Mike and Norma are active members of Lebanon church of Christ in Dresden. Mike has served as song leader for 29 years and has been caretaker for the church building, church yard, and cemetery for 38 years. Both Mike and Norma have taught Sunday School classes at Lebanon.

Riding a Kawasaki and Ultra Classic Harley Davidson motorcycle has been a huge part of their lives. They have taken trips on two wheels to Yellowstone National Park, Glacier National Park, Jackson Hole, Wyoming, Canada, and many interesting places across the United States. Mike and Norma met and started dating in the 1970s as Mike rode his motorcycle around the court square of Dresden on a Sunday afternoon.

Norma received her B.S. degree from UT Martin with a major in Early Childhood Education. She spent her first 20 years after graduation teaching at the old Dresden Elementary School. When the new Dresden school was built on Highway 22, Norma transferred to the Dresden Middle School and taught for an additional 14 years. Many of her former students associate her with her love of baking and sharing homemade chocolate chip cookies.

Norma loves her title of “Grandmama.” Babysitting, picking up grand girls from school and daycare, baking with the girls in the kitchen, going to T-ball, softball, little dribblers, soccer, gymnastics and cheerleading activities are the highlights of her retirement days.

Mike graduated from Dresden High School in 1969. He was very active in many organizations and was selected Most School Spirited of his class. Mike served as president of Future Farmers of America and participated in many contests and competitions during high school. After graduation, Mike worked for W.T. Cutchin Construction Company, H.C. Spinks Clay Company, and Hall Printing Company. Mike was hired as a revenue officer for the Tax Enforcement Division of the Tennessee Department of Revenue in 1976. He was later promoted to supervisor in the Jackson office. Before retirement in 2014, Mike was the West Tennessee Manager with his offices being in Jackson and Memphis.

During the years Kurt and Kyle were growing up, Mike helped coach their baseball and basketball teams. He was active in the booster club at both Dresden Middle and High Schools. For many years, Mike was in charge of the concession stands. He was Dresden Booster Club president, vice-president, and treasurer numerous times. His involvement allowed him to meet many people and make lifetime friends. He was awarded the Super Booster Award for Dresden High School Athletics for his services 1997-2005. He also received the Dresden Lions Football Super Booster Award for 2004-2005.

Mike was honored to have been recognized by the Dresden Rotary Club as Non-Rotarian of the Year in 2001. Mike was Volunteer of the Year for the 30th Annual Tennessee Iris Festival in 2009.

Mike has been an active blood donor through the Red Cross and Lifeline Blood Services. He has reached his 136th donation. This is equivalent to more than 17 gallons to help those in need of blood.

Mike served many years as a volunteer advocate of Tennessee State Employees. While representing over 18,000 state employees, he served two terms as a chairman of the Tennessee State Employees Action Movement, the political arm of TSEA. He held various positions with the local TSEA chapter that represents Weakley, Henry, Benton, and Carroll counties. He served several terms as president, vice-president, and treasurer.

Since retirement, Mike has enjoyed helping and supporting the Weakley County Backpack program, taking care of their farm, yard, and whatever projects come his way.