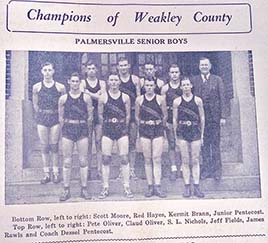 After the many refugees came to Weakley County to seek shelter from the storm and the crest of many rivers already passed, residents in the area were seeing the full extent of the flooding.

“Visitors Taboo Flooded Area Closed to All,” reported there were people trying to get into areas that had major flooding, but that was being stopped by the military. There were still many roads flooded and there were still concerns over levees. The Bessie levee was one that many felt was at risk from high water and strong winds. The wind was also causing the water to hit sandbag walls that were built. Unfortunately, the workers were unable to prevent a break in the Bessie Levee, which was located in Tiptonville, and the Mighty Mississippi broke through and flooded many farm fields and housing areas. Areas all around this levee, especially Cates Landing was flooded and evacuated.

An area between the Hickman and Bessie levees was not a constructed levee, but a wall of mud and sand. Workers from the state made sure that the Mississippi did not break this section. After the water began to recede some, there was less of a concern for any major flooding. But many sandbags were still being used to protect important highways and railroad tracks. It was estimated that thousands of sandbags were being used to keep the roads and railways open.

The National Guard was still in many areas and the water was slowly receding, with hope that residents from Tiptonville could return home soon.

Featured on the front page was an update for readers who donated milk titled, “Hearty Response to Appeal for Milk For Refugee Babes” that reads as follows:

“The Enterprise last Thursday carried an appeal for milk for the refugee babes here. The paper was got into the mail at noon. At 1 p. m. old faithful, Gordon Fowler, carried them to the homes.

At exactly 2 p. m. a good woman telephoned the office she would contribute a gallon of sweet milk daily.

From then on up until Monday others telephoned the Enterprise they, too, would donate sweet milk. So the babes are faring most sumptuously. Thank you – and God bless you!”

There was also a column titled, “Refugee Notes of General Interest” telling of how refugees of the flood were doing since coming to Dresden. One report noted, “Absolute contentment prevails among the refugees here. They say they are comfortably housed, get plenty of good, well-prepared food twice daily and that the children have even been provided with toys for amusement. However, since the CCC cooks were called to Tiptonville, the herculean task of actually doing the cooking has fallen upon a group of Dresden housewives.”

This also talked about how the county had three Red Cross nurses in Dresden, Martin, and Greenfield. Rev. L. M. Real of Greenfield asked for residents to send sweet milk for those in the area. Esq. Seymoure Buckley brought a truckload of food to different areas from the Little Zion area.

“Some of the men in the refugee camp say they would be glad to have a supply of good old Weakley county grown tobacco. If any one will make a donation, it may be left at the Enterprise office,” the column further noted.

Men were also asking for work in this area; that if any farmer could use extra work, they were willing to work while they waited to return home.

The article ended with this about the Latham area of Weakley County, “The good citizens of Latham and vicinity sent in a load of provisions Friday consisting of molasses, 25 gallons milk, hams, canned fruit and vegetables, dried beans and peas. Nolan Parker and Walter Smith were in charge, and stated that another truck load from Latham was already made up and would be sent in Saturday. Way back yonder, during the World War, the Fourth district was nearly always the first in the entire county to go over the top in all drives. Now, she is maintaining this standard.”

“The Dresden High basketball teams dropped a double header to Palmersville High. Palmersville girls overcame an early Dresden lead to win, 22 to 12. Dresden boys also led early in the game, only to succumb to Palmersville, 39 to 19. Mt. Pelia junior boys defeated Dresden juniors, 12 to 6. The Dresden High basketball teams won a double header from Martin here. The Dresden girls won an easy 56 to 9 victory as Alexander scored 24 points. Dresden boys copped a 42 to 24 decision as Brann led the scoring with 14 points.”

This was a slower week for noteworthy news, but the front page did have this thank you letter from the flood refugees which read as follows, “Dear Old Weakley County paper: Just a few lines to thank the good people for what they have done for us. I hope that God’s richest blessings rest upon you all. If I could only see them all together I could not get through thanking them for the fine things they have done for us. Our every need has been taken care of. – J. L. Ramsey.”

There was also a livestock sale in Dresden that resulted in the story, “Dresden Buyer Spent $10,000 on Opening Day.”

This story noted that from the flooding, farmers have not been able to ship their sold animals to buyers and others have not been able to make any purchases. Dresden resident Press Calvert paid $10,000 for hogs alone that was eight full carloads of hogs. Harvey Gardner bought 381 hogs for $7,500. Carlos Brundige bought 426 hogs for $8,390. A total of $31,390 was spent in Dresden during this hog sale.

“First of Refugees Leave on Wednesday,” was shown on the front page of the paper, signaling that the flood waters were receding enough for some to return home. It read as follows:

“Seventy-five flood refugees left Weakley county on Wednesday for their homes in Lake county, 35 of the number being among those housed in Dresden. These were all citizens of the higher areas north of Tiptonville. Their homes were never inundated by the flood waters, but were sent out as a precaution. The local Red Cross headquarters was notified Wednesday to evacuate those 75 refugees, some of whom were stationed at both Martin and Greenfield. The nine Paducah refugees left earlier in the week. It is expected that by the first of next week all refugees’ camps in the county will have been evacuated. Seventeen additional refugees left Dresden Thursday, making a total of 61 from the Dresden camp.”

In other local news, there was a report of the local 4-H Club titled, “189 Boys, Girls Enroll for 4-H Club Work”

This story reported there were many children signing up to join the 4-H club and told of local events that would be held, including a spring rally, summer club camp, and a one-day trip to West Tennessee Experiment Station in Jackson. Two crop judging and three stock judging teams would also be trained to compete in a National contest that could include a trip to Chicago if they won.

Dresden High School had the completion of its new gym commemorated by holding a county tournament held. One of the biggest updates to the gym was the addition of a timer to keep better time during games. Many spectators were said to be very impressed with the new gym and the work. The first team to win on this court was the Wesley Chapel girls’ basketball team, who beat Dunlap 41 to 23. Also winning was Wesley Chapel boys against Central. Dresden girls beat Martin. Dresden boys beat Greenfield, and the tournament continued later in the week.

This paper highlighted the conclusion of the county basketball tournament with the headline showing the winners of “Palmersville Senior Girls, Boys Winners”

Palmersville girls beat Dresden High School in a close match up by a score of 24 to 23, with this win putting Dresden in second place for the tournament. The Palmersville boys’ team had a larger lead at 27 to 11 over Dresden.

In the junior high games, Stella Ruth saw their girls’ team beat Central 40 to 17, to be crowned the champions. The Stella Ruth boys’ team also beat Palmersville with 22 to 17.

Greenfield beat Martin in the first game of the tournament 38-17, and Troy beat Palmersville 39-20. Hornbeak fell to Rives with 28-9. The teams came from Lake, Obion and Weakley counties to compete in this tournament.

There was also another update on refugees leaving the county. “The last of the refugees from Lake county stationed in Dresden left on Tuesday. Many of them returned to their homes in the higher areas in Lake county, while some were sent to general concentration camp at Martin. All these unfortunate people conducted themselves most becomingly while in our midst. No reports of bad conduct upon their part has come to our ears.” 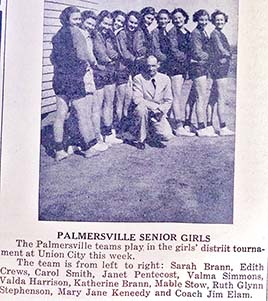