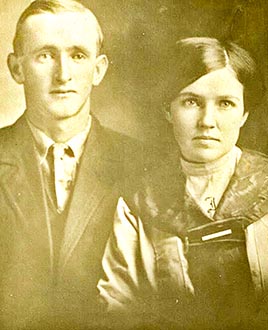 Gib became a member of the School Board, trying to help improve the education for country children who were often taken out of country schools to help the family on the farm. Men plowed with horses and mules, drove wagons and buggies for transportation. There was no electricity, running water or indoor plumbing, no telephones, radios or televisions. Women grew mammoth gardens, canning and preserving food for the winter days. When the TVA brought electricity down the country roads in the late 40s, women learned the convenience of electric stoves, irons, washing machines and deep freezes to store their food.

Families suffered through the Great Depression, World War I and World War II, where the build-up of war materials finally brought a measure of prosperity to the impoverished, war-torn South. Gib was one of the first farmers in the county to be allotted the purchase of a tractor, possibly because his three oldest sons were in the war. After plowing with mules, young John learned to drive the tractor, creeping down the field, hollering “Whoa.”

Gib and Ida’s three sons, Flavil, Howard and Dink; and three sons-in-law, Bert Walker, Dan Roney and Eulain Killebrew served during the war. Later, John served during the Korean War. Seven grandsons served during the Vietnam War and other peace-keeping missions, while a great-grandson served in the National Guard as a Tango Military Intelligence Systems Maintainer/Integrator. (He trained at Ft Huachauca, Arizona, established in 1877, to secure the Mexican border and to contain the threat of Geronimo and the Apaches.) Recently, a New Jersey great-great grandson, Ayden McLaughlin, joined the U.S. Navy, continuing the family’s tradition of serving their country.

When Franklin D Roosevelt was running for an unprecedented fourth term as President, Dink, who was serving in Patton’s famed Third Army with the 37th Tank Battalion, recalled the election caught up with the fast- moving army at different locations in France.  He said he voted twice and lost both votes.

Editor’s note: This is Part 4 in an historical series provided by Joyce Billingsby of the Latham community. The series spotlights historical events and family members connected to Billingsby Farms, which was recently named a Century Farm. The series continues every other week, coinciding with The Enterprise’s “Looking Back – From the Archives” reports.